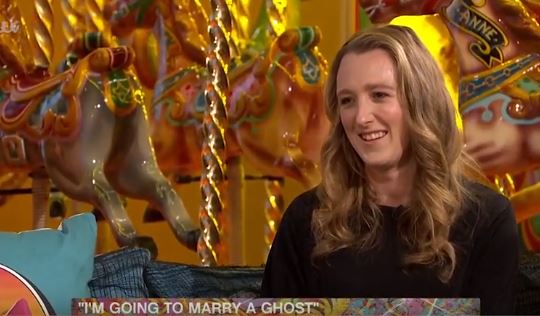 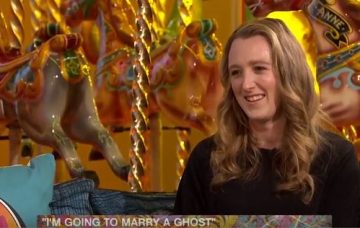 This Morning guest engaged to ‘ghost’ lover after romantic proposal

She met the spirit while in Australia earlier this year

This Morning experienced a show first on Halloween when Phillip Schofield and Rochelle Humes welcomed a ‘ghost’ to the sofa.

The pair were interviewing psychic Amethyst Realm about her recent engagement to ‘ghost’ boyfriend Ray when he made an unexpected appearance.

Phillip had been chatting to Amethyst about Ray’s recent proposal when he asked where the ‘ghost’ was while she was being interviewed on TV.

A surprised Phil asked: “Where?!”

Amethyst pointed to the space on the sofa next to her, as the This Morning camera zoomed in.

Phillip said: “Ray, it’s a pleasure to meet you. Obviously we couldn’t do a research with Ray and we’re not able to ask him… can I ask him a question?”

Amethyst said Phil “could try” so he asked: “What was it about Amethyst that made you fall in love, Ray?”

She answered for Ray, saying: “He just said the connection, as soon as we met we felt a connection that was really strong.”

Amethyst, who has appeared on This Morning before to discuss her romantic relationships with ghosts, said Ray was given that name by a friend after he appeared as a ray of light in a photo.

She said they were engaged last weekend after meeting in Australia at the start of the year.

Amethyst said it’s very rare for spirits to travel to another country so she was thrilled when Ray decided to get on the plane from Australia to the UK with her.

“I don’t know much about his past other than he’s very ancient, very wise and he’s been around a long time,” she said.

“We were at Wookey Hole last weekend on a tour and he asked me to hang back from the rest of the tour group and he proposed to me. It’s the first time I ever properly heard his voice, it sounded like it was echoing throughout the whole cave.

“He asked, ‘Will you marry me?’. It’s difficult to explain. It’s in my head but I heard it outside as well.”

When asked if she had an engagement ring yet, Amethyst said: “We are looking for one but he’s really picky and it’s been really difficult. We’re in the process of planning the ceremony at the moment.”

Phillip concluded the interview by saying: “Every time you come in it’s absolutely fascinating. Are ghost babies next?”

Amethyst replied: “Maybe, I don’t want to scare him off by talking too much about it but I’d like that.”