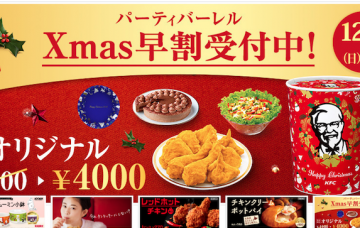 Oddest Christmas meal traditions from across the world

Vegetarians and vegans, look away now. After all, you deserve a merry Christmas too.

There aren’t many traditional festive meals that don’t involve meat or dairy – but not everyone sits down for a hearty plate of frozen whale blubber on December 25th before tucking into Christmas pud, either.

And while we at ED! will probably be sticking to turkey or a nut roast, here’s a taster of some of the oddest traditional Yuletide bites from across the world.

Would you fancy cooking up any of this lot when you’ve got the entire family round?

The options are kept pretty simple for Christmas dinner in the UK: turkey for traditionalists, chicken for those who can’t swallow dry lumps of turkey, lamb or beef for those showing off and a empty plate of thin air for anyone that moans.

But in Puerto Rico, Christmas just isn’t Christmas without a whole roast pig on a spit.

For sure, lechón can be enjoyed all year round – and is also hugely popular throughout the Philippines and Caribbean – but a plate of pork so tender it practically drips off the bone, washed down with a coconut shell full of eggnog nd rum sounds much more appealing than over-boiled sprouts and soggy trifle.

These colourful cakes contains nuts, raisins, cinnamon, squash jam and crystallised fruits, but are completely different to Stollen from Germany – and are derived from a French pastry.

Made with a large hole in centre to represent a crown belonging to one of the Three Wise Men of the Nativity, the Bolo Rei also comes with a couple of extra ingredients not meant for eating.

Similar to the sixpence in a Christmas, Bolo Reis traditionally include a small metal toy baked inside… although that practice has lessened due to health and safety concerns.

However, Bolo Reis also tend to contain another secret addition – a baked fava bean that when discovered means the person who finds it has to pay for the Bolo Rei next year!

At a time of year when those scoffing to gluttonous excess will still leave the green triangle ones to gather dust in the Quality Street tin, we can’t imagine there will ever be much take up for these Inuit delicacies in the UK.

A hearty dosh of frozen – and obviously raw – diced whale skin and blubber, Mattak apparently has a nutty taste. But again, probably not like the Quality Street hazelnut noisettes.

Now I’m not crazy about shopping in the city, I love that I get chances to see friends and family more! @louisa198 Rita put out an amazing spread out for us! #inuitfood #nutritiousnorth #indigenousdiet #mattak #tuttuviniq #iqaluppik #mattaksausage #quaq #soulfood

It is also said to be a good source of vitamin C. The closest we get to a source of that on Christmas morn is from the Buck’s Fizz and Terry’s Chocolate Orange we have for breakfast. Contains less mercury, too.

Kiviak meanwhile is a heady mix of baby birds which have been buried in seal skin for several months and are well decomposed by the time they’re eaten.

We won’t have seconds, thanks.

As always, Japan is at least ten years in the future. Kentucky Fried Chicken over a dinner table of crackers and family arguments seems the logical future for Christmas congregating, and saves on the washing up too.

‘Kentucky for Christmas’ took off in Japan in the early 1970s as part of a promotional tagline and has become a staple in a country where less than 3% of the population are practicing Christians.

Usually enjoyed as a takeaway rather than eating in, KFC Japan’s special festive buckets include various cakes and even a whole bird alongside the usual herby offerings, all wrapped up in jolly packaging.

Missed a trick not getting into roast potato-type chips, though.

Would you be tempted to tuck into any of these meals on Christmas Day? Or will you always stick with turkey and all the trimmings?