Channel 4’s The Virtues got underway last night (May 15) and floored viewers with a heart-wrenching performance from Liverpool-born actor Stephen Graham.

The gripping new drama, from This Is England creator Shane Meadows, tells the story of a recovering alcoholic who travels from Merseyside to Northern Ireland on a mission to face the demons of his past.

In the opening episode, Joseph (Graham) was emotional as his ex-wife prepared to emigrate to Australia with their young son and her new partner.

On the eve of their move, Joseph went to their house for dinner and got to say a tearful farewell to his son, who asked why his dad wasn’t able to move with them.

In emotional scenes, Joseph told his son he would enjoy his new home and had permission to call his mum’s new partner ‘Dad’ if he wanted to.

Viewers were stunned by Line of Duty star Stephen Graham‘s performance in The Virtues, hailing him as a “stunning” and “incredibly brilliant” actor.

One wrote on Twitter: “Once again another outstanding performance Mr Graham. Loved the first episode of #TheVirtues. Absolutely gripped!! Can’t wait for next week!”

Another said: “@StephenGraham73 the whole scene in the pub was perfection mate, so good it made me scared what you were going to do or say next.”

A third viewer tweeted: “@StephenGraham73 just caught up with #TheVirtues and once again you didn’t disappoint, what an incredibly brilliant actor you are! Can’t wait till next week.

Someone else wrote: #TheVirtues Magnificent. @ShadyMeadows some of the most intense drama I’ve seen for a while. Bravo @StephenGraham73 et al. Loved the scene with @MichaelStarke57.”

A fifth said: “Hold on to your seats… that was brutal! Raw, heartbreaking and mesmerising. Just in awe of @StephenGraham73 Was like [a] documentary in parts. Stunning performance. #TheVirtues How does he get over that intensity?”

Another telly fan tweeted: “Cripes that @StephenGraham73 knocks it out of the park in #TheVirtues Amazing performance.” 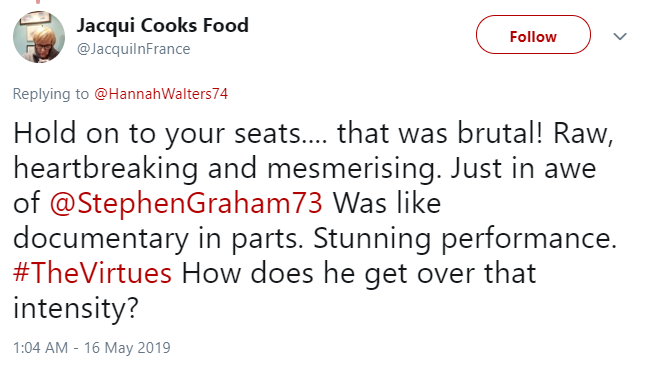 Episode one saw Joseph relapse into alcoholism. When his former partner left the country with his son, he headed to a boozer and got riotously drunk.

Later parts of the night out included an ominous religious speech and flashbacks played out in Joseph’s head, suggesting something from his long-buried past still haunted him.

He awoke on the floor of his apartment, cut and bruised and covered in vomit. After cleaning himself up and mulling the impact of his destructive behaviour, Joseph plucked an old photograph from a display on his wall, gazed at it for a time and then decided to travel to Northern Ireland.

In the lead up to the first episode’s closing scenes, Joseph sat on a park bench with a bottle of cider. But the sight of a man playing with his children inspired him to kick his addiction and he binned the booze before getting his boat across the Irish Sea.

Are you looking forward to seeing what happens next in The Virtues? Leave us a comment on our Facebook page @EntertainmentDailyFix and let us know.