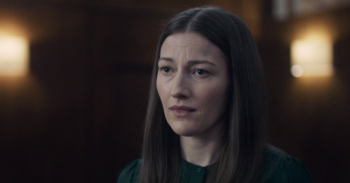 The four-part legal drama, created by Killing Eve writer Rob Williams, is about grieving mum Anna Dean (Macdonald) and her decision to post the details of suspected child killer Craig Myers (Harkness) online – only to ruin the life of a potentially innocent man.

Anna is, understandably, riddled with grief and gripped by a yearning to get revenge on the man she thinks killed her young son years ago.

While no one has had a bad word to say about Kelly Macdonald’s acting, it appears viewers are struggling to like the main character, with some admitting they find her “insufferable” and “awful”.

Taking to Twitter, one viewer said: “Anna continues to be awful – manipulating everyone , not raising her son properly as she is too busy being a nutcase so he is lashing out. Not dropping this vendetta which has zero proof. Glad her husband told her some home truths. I also don’t care who EJT is.”

Another wrote: “Catching up and already find the mother Anna extremely unlikeable. She has been through something awful but the fact she is so very ghastly makes it impossible to sympathise/empathise. She just seems hell bent on any kind of revenge regardless of who suffers.”

A third tweeted: “Looking forward to #TheVictim finale tonight. Mostly because I find Anna Dean absolutely insufferable and I won’t have to watch her anymore, but last night’s plot twist was GOOOOD. Also can’t help but think the whole thing just totally wouldn’t happen that way in real life?!” 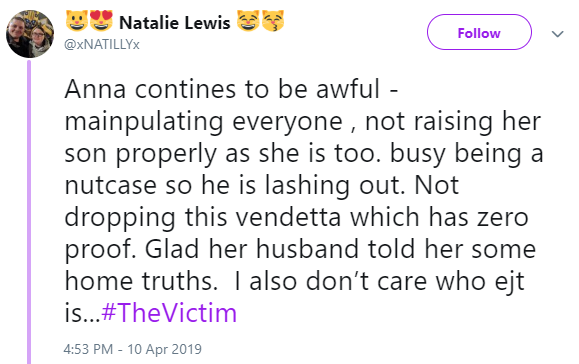 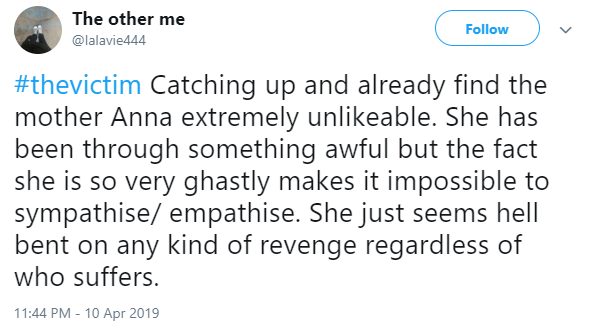 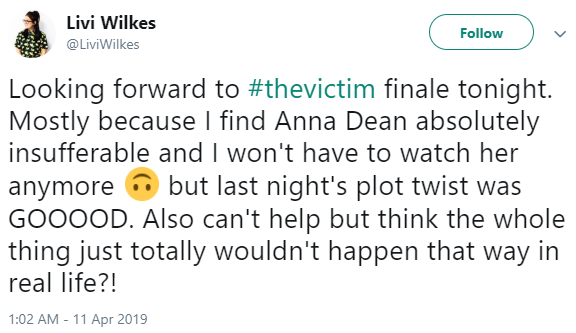 A fourth commented: “Interesting plot strategy, making Anna so unlikable. Her daughter’s creepy b/f is acting even more suspiciously & what’s Craig’s pal Tom seeing the social worker about? Also, who’s that lad who kicked off in the surgery because Anna wasn’t there? I have more questions!”

Someone else said: “I am really not liking the Anna Dean character in #TheVictim. I’m not rooting for her at all. Lenny nailed it when he said she’d made it all about her.”

“Really struggling to like Anna,” wrote another, adding: “Don’t think Tom is EJT and the husband, sister’s boyfriend and guy from clinic are all too dodgy. I’m sure it will all make sense tomorrow!” 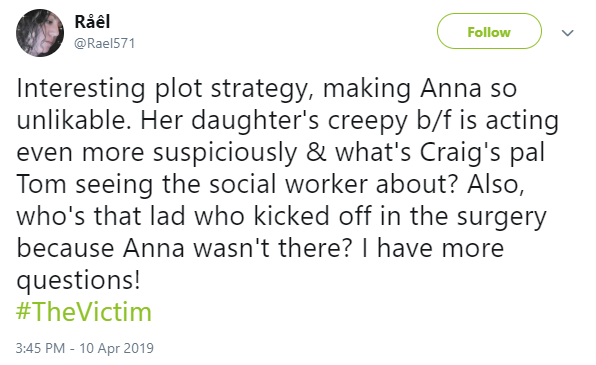 In episode three of The Victim, a retired detective gave Anna the name of a social worker who meets with child killer Eddie J Turner regularly at a cafe.

Determined to finally lock in on the real killer (and equally determined to see it turn out to be Craig Myers), Anna had her friend, PI Mo Buckley (Pooky Quesnel) stake out the cafe and wait to see who turned up to meet the social worker.

In the closing scene, it wasn’t Craig who rocked up but his mysterious pal Tom – the man who viewers have thought is Eddie J Turner since episode two, after deciding it’s not Louise’s creepy boyfriend, Danny.

– The Victim concludes tonight (April 11th) at 9pm on BBC One

Leave us a comment on our Facebook page @EntertainmentDailyFix and let us know what you think of The Victim.