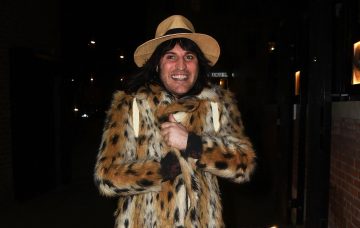 For anyone who’s seen The Mighty Boosh, The Great British Bake Off or just the contents of Noel Fielding’s wardrobe, a dash of the unusual is expected from the comedian turned presenter.

So the revelation that his newborn child’s name is a bit different will come as no surprise.

Noel, also an artist who works in drawing, painting, collage and multimedia installation, seems to have been inspired by one of his favourite artists.

The Sun report a source as confirming the name and suggesting that it’s perfect for the couple.

“Noel thought the name was a perfect fit,” says the source. “Salvador has played a big part in his life, so it’s no surprise to his friends he’s named a baby after him. It’s a cute name and really suits the tot.”

Noel and Lliana’s baby was born earlier this month with the couple having been together since 2010.

They have decided not to reveal the gender of the baby in public and also kept a low public profile during Lliana’s pregnancy.

Noel has trained at Croydon Art College and his first solo show, Psychedelic Dreams of the Jelly Fox, was a sold out success at Gallery Maison Bertaux.

His work has also appeared at the Royal Albert Hall and the Saatchi Gallery, with collectors including the likes of Damien Hirst and Ringo Starr.

Noel’s life has already been influenced by Salvador Dali if you believe one of his celebrity pals, with Kasabian star Serge Pizzorno suggesting he was key to Noel’s decision to join The Great British Bake Off.

Serge told The Sun that he and Noel had discussed whether Noel should take the job before deciding that it was OK to go ahead because of Salvador Dali’s own past.

“We figured Salvador Dali did a chocolate advert, so that sort of makes it all right” he said.

What do you think of their choice of name? Leave us a comment on our Facebook page @EntertainmentDailyFix and let us know what you think!