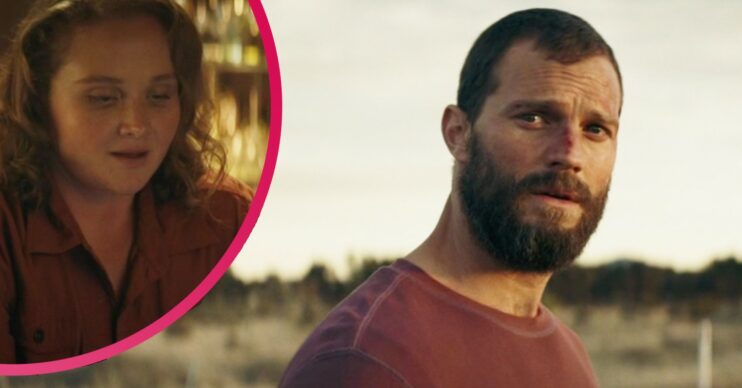 The Tourist final: Questions we STILL have including ‘will there be a second series?’

We're just not ready for it to be over

BBC One’s brilliant drama The Tourist is over, sob – will there be a second series? The final episode, starring Jamie Dornan as The Man, was a rollercoaster, with even more shocking twists packed in.

We cheered when Helen (Danielle Macdonald) ditched her horrible husband-to-be. We sobbed when Luci (Shalom Brune Franklin) died in the back of Elliot’s car. We cheered again when Helen grabbed Elliot through the bars of his cell and kissed him.

The biggest shock of all was when Elliot finally discovered the truth about Lena Pascal, the mysterious woman smiling enigmatically at him in his flashbacks. And it wasn’t very nice at all. Rather than being something comforting from his past, Lena told him exactly what kind of man he really was.

She told him that Elliot had used her as a drug mule, showing him a scar on her abdomen where the drugs were cut out of her. Elliot also learned that two other women he’d used had died. And she’d only been smiling in his memories because Elliot had forced her to practice. Grim.

This was not what Elliot was expecting at all. He was hoping to discover that he was a good person. Unsurprisingly, he wasn’t very happy to hear this.

Why did Lena Pascal let Elliot off?

After hearing Lena’s story, Elliot tried to make a confession to the police so he could be punished for his crimes. But he was released. Lena told the police that Elliot had made a mistake. So why did she do this?

Lena knew that forcing Elliot to live with what he’d done would be a worse punishment to him than jail.

Why was Elliot trying to kill himself?

Lena was right. Elliot couldn’t face a lifetime knowing about the bad things he’d done previously. As soon as he was released from prison – after giving the million dollars to the owner of the guesthouse – he ran his car off the road. In scenes that echoed the first episode, Elliot woke up in a hospital bed.

This time, he knew his name. And, of course, what he’d done.

She was pretty mad at him when she visited him in hospital. Elliot tried to argue his case, saying that no one knows the circumstances or why he made Lena do what she did. But Helen told him that nothing could excuse his actions.

She walked out of hospital, leaving him totally alone.

It’s not clear if Elliot survived after necking all the pills and alcohol he’d bought to end his life. Or if Helen was able to save his life this time, by reaching out to him. He was still conscious when Helen’s burrito came through, bringing a smile to his face. But did he then call for help? Or let the drugs do their job?

Obviously we’re hoping Elliot called an ambulance and that he and Helen reunite.

Will there be a second series of The Tourist?

Read more: Opinion: Critics are missing the point of BBC One’s The Tourist

Which brings us to the question of whether or not we’ll be seeing more of Elliot. There’s nothing confirmed at the moment about a second series of The Tourist, but there are enough loose ends to warrant a follow-up.

And Jamie The Man Dornan has hinted that there could be another series on the cards.

“The plan was always for it to be a one-off,” he said, in an interview with RadioTimes.com.

However, he added: “I guess it’s a little bit open-ended with the end, people still have questions.

“Obviously we had good plans for it, wanted it, but the response to it, as you know, has been insane and the amount of people [who have] watched it, and the love for it is very real.”

He teased: “I saw something the other day that they said that there’s talk of… they’d be looking into how they could do a second series of it if there is a want, and it seems there is a want.

“So who knows, the plan was only ever to play The Man once, but we’ll see.”

Did you love The Tourist? Do you want another series? Leave us a comment on our Facebook page @EntertainmentDailyFix.