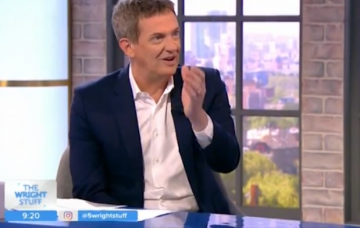 Matthew Wright has revealed that the demands of presenting a daytime show are the reason for his decision to leave his long-running Channel 5 show.

“Matthew, I think we’ve got to talk about the elephant in the room…”

Here’s the answer to all the questions you’ve been asking for the past 24 hours!@Matthew_Wright | @TheAnneDiamond | #wrightstuff pic.twitter.com/6APJaBr6ce

On Wednesday morning’s edition of The Wright Stuff, one of the panellists, Anne Diamond, asked the 52-year-old presenter to “talk about the elephant in the room” – his announcement on Tuesday that he would be moving on.

Matthew explained: “There is not a lot to say really, other than the fact – you know better than most – the demands of getting up for a daytime show.

“I’m not going to equate it with digging roads, which is hard as well, but the old brain! I’m up at three o’clock in the morning these days. I go to bed at half seven. I’ve had 18-and-a-half years of it.

“Mrs Wright, we pass like ships in the night. And you are looking around thinking at some point you have got to have a change.”

He thanked viewers and his followers on social media for the messages of support they have sent him since he made the announcement.

Trending on twitter…I shd quit more often…seriously tho thank you for all the messages. A few tears shed. But nice tears…x

Matthew said: “I have to say, I had no idea that people could be so nice on Twitter.

“Because normally you come off a show and it’s ‘You’re this, you’re that, and I hope you die a hideous death’.

Thanks again for all the amazing comments and messages. I had no idea ❤❤❤ not going anywhere for a couple of months btw xx

Matthew confirmed he would continue to present The Wright Stuff until the summer.

“‘I’m really going to miss your wit and your charm’ – actually, I’m not planning on parking it just yet!

“And in fact, I think people wanted to know, I’m here, as far as I know, until late June, beginning of July.

“I have no idea what I’m going to do next. I am available for weddings, birthdays and bar mitzvahs!”

Wright has hit the headlines several times during his time on The Wright Stuff, which launched in September 2000.

The former journalist sparked controversy after hosting a TV debate entitled “Foxy Knoxy: Would Ya?”, discussing with panellists how Amanda Knox was “undeniably fit and loves wild sex”.

Who do you think should replace Matthew? Leave us a comment on our Facebook page @EntertainmentDailyFix and let us know what you think!