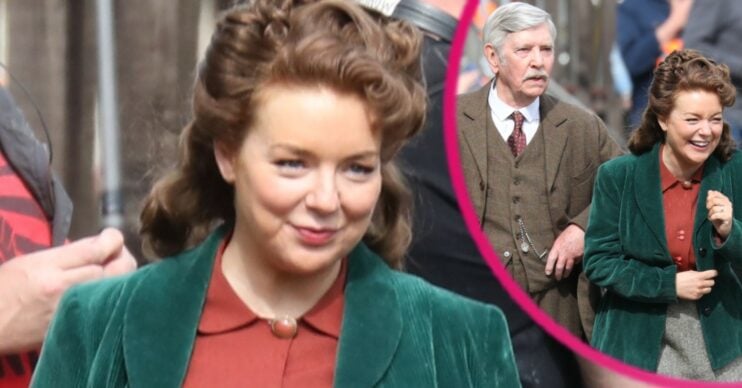 The film is due in cinemas next year

The Railway Children star Sheridan Smith looked completely different as she transformed into her character on set of the iconic remake.

The 39-year-old Cilla actress is currently filming the 1970 classic in Yorkshire with her co-stars.

Channeling a glamorous 1940s look this week, Sheridan was spotted in a pink hair net on set.

The actress, who is set to play a school mistress in the film, was also joined by several crew members.

At the time, she wrote on Instagram: “So excited to announce my next filming job! Starting this month… @studiocanaluk All aboard!”

The new sequel will see a group of children evacuated to a Yorkshire village during World War II.

However, the group later come across a young soldier.

The Railway Children: Sheridan shows off her costume

Alongside a shot of herself in full costume and makeup, she penned: “So happy to be back filming.”

The post was met to plenty of excited fans, with one saying: “Can’t wait to see this.”

So happy to be back filming

A second shared: “Can’t wait till this comes out.”

Another added: “Glad to hear your back on set filming.”

In addition, actress Anna Friel commented: “Looking radiant and oh so happy. Good for you.”

Who else will appear in The Railway Children?

Sheridan will be joined by a few familiar faces.

The Railway Children’s original star Jenny Agutter will return in the role of Roberta ‘Bobbie’ Waterbury.

Read more: Sheridan Smith worries fans as she shares cryptic message over the ‘most shocking news’

Tom Courtenay will also appear in the upcoming movie.

Furthermore, a new generation of railway children will feature in the flick.

Announcing the upcoming film, producers Studio Canal said: “Inspired by one of the most beloved British family films of all time…

“…The Railway Children Return is an enchanting adventure for a new generation, bringing a contemporary sensibility to a classic story and combining British cast with stunning locations.”

When did the original Railway Children hit screens?

The original movie first aired in 1970.

However, the story was based on E Nesbit’s novel, which tells the story of the Waterbury children.

The main characters in the book are Bobbie, Phyllis, and Peter.