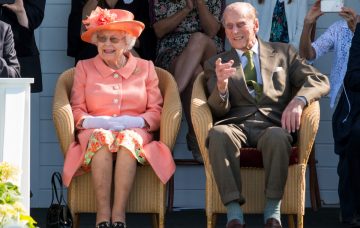 The Queen and Prince Philip to miss Prince Louis’ christening

The tiny royal will be christened at The Chapel Royal, St James' Palace

The Queen and Prince Philip will not attend their great-grandson Prince Louis’ christening on Monday afternoon.

Buckingham Palace confirmed Her Majesty, 92, and The Duke of Edinburgh, 97, will not be present at The Chapel Royal, St. James’ Palace, but said it was not related to any health issues.

A spokesperson told BBC News the decision not to attend had been made “some time ago”.

The Queen’s had a busy period of engagements recently, and it’s believed she’s travelling back to London from Norfolk on Monday.

She has another busy week coming up, including President Trump’s visit to the UK and the centenary of the RAF.

The guest list for Louis’ christening has been kept very small, with just a handful of close friends and family invited.

The only senior members of the royal family in attendance will be The Prince of Wales and The Duchess of Cornwall, and the Duke and Duchess of Sussex.

Kate’s parents, Michael and Carole Middleton, will be present, alongside her sister Pippa and husband James Matthews, and brother James.

All six of Louis’ godparents and their spouses will be there.

Prince Louis Arthur Charles of Cambridge ,who is fifth in line to the throne, was born on April 23 at the Lindo Wing at St. Mary’s Hospital in Paddington, London, just like his big brother Prince George, four, and big sister Princess Charlotte, three.

He has not been seen in public since William and Kate left the hospital with him, so excitement is building among royal fans, eager to catch a new glimpse of the little one at Monday’s christening.

Prince Louis will wear the handmade replica of the Royal Christening Robe, made by The Queen’s dressmaker, Angela Kelly.

Water from the River Jordan will be used during the baptism at The Lily Font.

The Duke and Duchess of Cambridge will host a private tea party at Clarence House following the christening, where guests will be treated to christening cake made from a tier of the couple’s wedding cake.