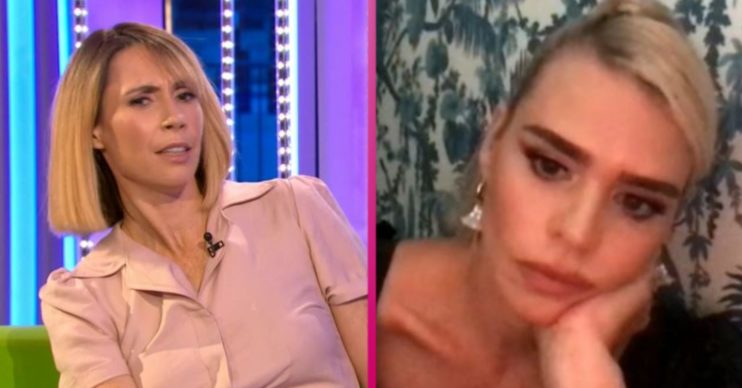 The One Show: Viewers baffled after ‘weird’ Billie Piper interview

The star was on to talk about her new show, I Hate Suzie

The One Show welcomed actress Billie Piper on for a chat last night, but her behaviour during the interview left some viewers baffled.

The former singer, 37, featured on Wednesday (August 26) evening’s episode of the BBC talk show for a chat with host Alex Jones and stand-in presenter Michael Ball.

What happened with Billie Piper on The One Show?

Those watching at home were puzzled as they thought Billie seemed bored during the conversation.

Others wondered why she sat with her hand on her face during the “weird” interview.

Read more: The One Show host Alex Jones fights back tears as she pays tribute to colleague after death

One on Twitter said: “Does Billie Piper know where her webcam is? Clearly doesn’t want to be there. #TheOneShow.”

Another said, “Don’t think they’ll be asking Billie back for an interview in a hurry… #TheOneShow” and added in a separate tweet, “She was weird”.

Someone else agreed, writing: “I thought the same! Wasn’t really interested at all.”

Clearly doesn’t want to be there.

“Why could Billie Piper not take her hand off her face?” asked a fifth.

Does Billie Piper know wherre her webcam is???? Clearly doesn't want to be there. #TheOneShow

Billie was on to talk about her new show, I Hate Suzie, and Alex asked how much the character she plays was based on her.

The former Doctor Who star said: “I would say that a lot of our feelings and emotions and observations feature in the show and drive the narrative.

“But moment-to-moment autobiographical [aspects are] not… in fact, I would be quite nervous for people to think that some of these things actually happened to me!”

The series’ writer Lucy Prebble, who was on with Billie, said: “I wrote the eight episodes of the show and we created that show together.

What is Billie Piper’s new series I Hate Suzie about?

I Hate Suzie tells the story of a former child star called Suzie Pickles (Billie Piper) who is now an actress. Suzie has a seemingly perfect life.

But things start to unravel after someone leaked compromising images and details about her private life online.

All episodes of I Hate Suzie are available to watch on Sky Atlantic and NOW TV from today (Thursday, August 27).

What did you think of last night’s The One Show? Leave us a comment on our Facebook page @EntertainmentDailyFix and let us know.

BBC Billie Piper The One Show