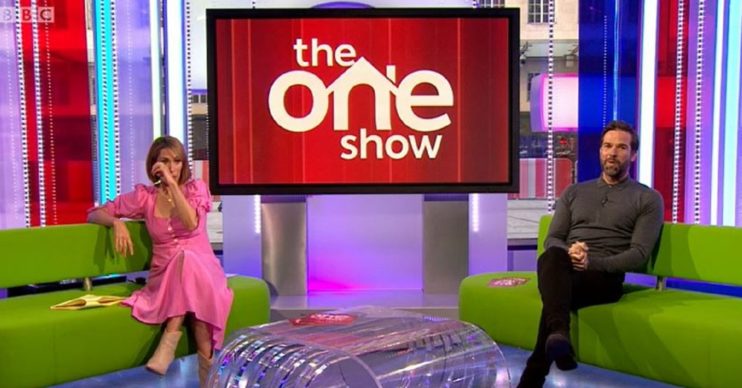 She was overcome with emotion

Actor Christopher Eccelston’s touching tribute to NHS workers, a poem penned by a fellow Salford resident, reduced Alex Jones to tears on The One Show.

During Tuesday’s (May 5) episode, The A Word star read out a moving poem about health service workers who have lost their lives during the coronavirus pandemic.

Introducing the segment, Alex explained: “Chris is going to perform a poem called Our Heroes which is a really nice tribute to NHS workers.

Her co-host, Gethin Jones, said: “It was written by Matt Kelly, a fellow Salford lad. [He] was inspired to write it after hearing the challenges his partner faced working as a district nurse.”

A poem about ‘our soldiers in blue’

Piano music then accompanied Chris’s reading of the poem.

He began: “I’ll tell you a tale that’s been recently written, of a powerful army so Great it saved Britain.”

He continued to talk about the valiant efforts of “our soldiers in blue” to save the lives of those infected with COVID-19. As he spoke, a montage of doctors and nurses played on the screen.

We love you, our heroes. Lest we forget.

The video also showed members of the public clapping in the streets for the weekly Clap For Carers round of applause.

Lines in the poem compared the coronavirus battle to the struggles of the First World War, including with the line: “They leaped from the trenches and didn’t think twice. Some never came back, the ultimate price.”

Christopher concluded: “So let’s line the streets and remember our debt. We love you, our heroes. Lest we forget.”

When the camera cut back to hosts Alex and Gethin on the sofas, Alex was visibly emotional as she struggled to speak through tears.

“Thank you so much, Chris. Very, very touching indeed, wasn’t it? I bet I’m not the only one!”

It seems she wasn’t, as tearful viewers reacted to the reading on Twitter.

One said, alongside a crying emoji: “Very powerful reading of the NHS poem by Christopher Eccleston #TheOneShow.”

Someone else tweeted: “#TheOneShow in tears here. That poem was very true and moving.”

Another wrote: “Aww @MissAlexjones I was in bits too over Christopher’s beautiful poem #SoEmotional #TheOneShow.”

#TheOneShow in tears here. That poem was very true and moving

What did you think of the Our Heroes poem? Leave us a comment on our Facebook page @EntertainmentDailyFix and let us know.