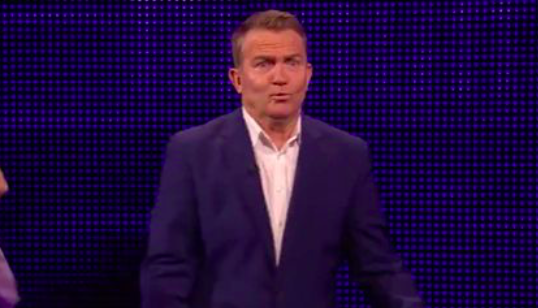 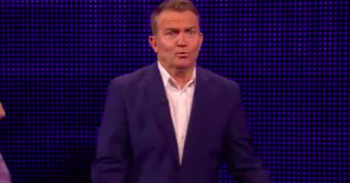 The Chase’s Bradley Walsh stunned as contestant kisses him on the LIPS!

Bradley Walsh announced he “needed a little lie down” after an overzealous contestant kissed him on the LIPS during filming of The Chase.

On Wednesday (1 May), host Bradley was visibly stunned when an excitable Kathy couldn’t resist going in for a kiss, after beating the chaser and winning £6,000 on the money builder round.

Read more: Bradley Walsh in stitches over very rude answer to question on The Chase

Kathy joined Gareth, Saffron and Furo on the team, and was clearly very thrilled to be taking part on the show.

Even the usually unruffled Anne Hegerty, aka The Governess, asked “what Kathy was on?”.

Perhaps it was Bradley’s aftershave?

55-year-old Kathy jumped up and down after securing her place in the Final Chase, before rushing over to hug Brad.

However, the hug soon became a kiss – which left Bradley’s face puckered up in shock.

As he looked at the camera in mock horror, Anne joked: “She seems quite pleased.”

As she finally headed back to her seat, Kathy said: “Oh my god, I can’t believe it.”

To which Bradley replied: “Join the club.”

As Anne commented: “Yes that was unusual. Are you alright?”

Bradley announced he was “going for a lie down” – but, of course, he had to continue filming the show.

Fans watching from home were equally as surprised, with one tweeting: “Literally cringed when she went and kissed Bradley!! #TheChase.”

“Poor Brad, he didn’t know what to do,” added another.

A third said: “Definitely inappropriate. Imagine if a female presenter was kissed like that by a man #thechase #BradleyWalsh @ITVChase.”

A fourth added: “Anyone else think it was totally inappropriate how that contestant kissed Brad?”

Literally cringed when she went and kissed Bradley!! #TheChase pic.twitter.com/PlEjIZtqSz

Poor Brad! He didn’t know what to do!

Definitely inappropriate. Imagine if a female presenter was kissed like that by a man #thechase #BradleyWalsh @ITVChase

Anyone else think it was totally inappropriate how that contestant kissed Brad? 🤔 #thechase

Others found it funny.

In the end, Kathy took part in the Final Chase alongside Gareth and the pair managed to beat Anne and take home a share of £13,000.

So it looks like it really was Kathy’s lucky day. Not so much Brad’s, though.

A bit of fun or inappropriate? What do you think of Kathy’s kiss? Leave us a comment on our Facebook page @EntertainmentDailyFix and let us know what you think!