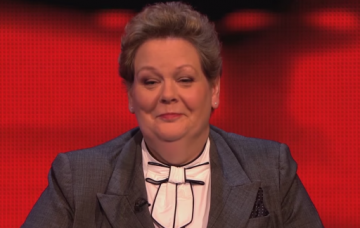 Anne Hegerty stunned in a salmon pink gown on a night out in Manchester this week.

The Chase star, 60, dressed up on Tuesday evening (May 7) for the Pride of Manchester awards, posing for pics outside The Principle Hotel in a glamorous dress, white heels, drop earrings and a metallic clutch bag.

It was a firm departure from the austere look she normally adopts as her TV alter-ego The Governess.

It follows a clash Anne had on Twitter earlier this year with a troll she branded a “sad [bleep]”.

She spoke about her experiences with online abuse on Lorraine and said ITV had previously “threatened to suspend” her over the tweet, ordering her to delete it.

Anne said on the show that she’s been “known to get in trouble” for answering back on Twitter.

She explained: “I tweeted a tweet last month, it got 25,000 likes, before ITV ordered me to take it down and threatened me with suspension.

She added: “One is not actually trying to upset the source of one’s bread and butter.”

Anne recently had her fans in fits of laughter with her witty response to Twitter users who compared her to a bare-chested male football fan.

Some thought a moob-flashing Newcastle United supporter, snapped celebrating at the match, bore a stark resemblance to the quiz master.

When one fan jokingly asked her to “prove it”, Anne quipped: “My [bleeps] are bigger than that.”

Anne’s no stranger to stunning her fans with a more glamorous get-up than they’re used to seeing.

In March, she showed up at The National Film Awards 2019 in a glamorous floor-length frock – a world away from The Governess, or her dressed-down appearance in the celebrity jungle camp.