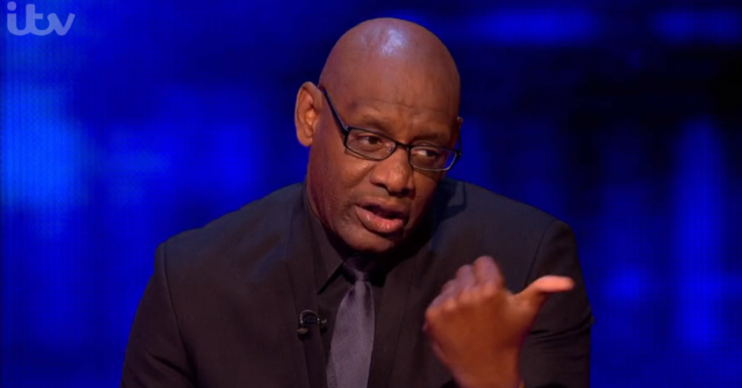 The Chase: Shaun Wallace orders ‘rude’ contestant off the set

Shaun Wallace was forced to tell a contestant to “get off” the set of The Chase after he brutally mocked the quizzer.

During last night’s (Tuesday, May 19) episode of the ITV quiz show, the first contestant was pension consultant Parin, from Middlesex.

The 36 year old took his turn at the cash-builder and managed to get four questions correct.

Asked who he hoped to face in the head-to-head, he said: “Maybe the Dark Destroyer, because he’s lost his mojo.”

When Parin’s wish came true at Shaun walked into the studio, he demanded: “So I’ve lost my mojo, have I Parin?”

“Well I’m about to pension you off,” Shaun told him.

Parin decided to stick with his cash-builder pot of £4,000 and Shaun said menacingly: “Let’s really do this, Bradley.”

He just got lucky.

Shaun caught him, in the end. As Parin lost, Bradley asked: “Mojo back, do you think?”

Told to ‘get off’ the set

But the cheeky contestant said: “No, he just got lucky.”

On Twitter, viewers rallied behind Shaun and branded Parin “rude” and “mouthy”.

“The Dark Destroyer has found his mojo,” applauded one fan of the show.

Another said: “Well done Parin you mouthy [bleep]. ‘The Dark Destroyer has lost his mojo…’ Parin gets caught. Muppet! #TheChase.”

A third wrote: “That’ll teach you for dissing our Shaun! #TheChase.”

Someone else tweeted: “Shaun! Love you more for this!”

A fifth wrote, as their head-to-head got underway: “DESTROY HIM SHAUN. Rude fool. #TheChase.”

That’ll teach you for dissing our Shaun!! #TheChase

Read more: Mark Labbett claims to know people who cheated on Who Wants to Be a Millionaire?

It follows a contestant who caused a stir on The Chase last week by guessing his way to a £50k win in the head-to-head round.

Ryan, a greyhound trainer, managed to bring five-figures to his team’s prize pot – despite not knowing any answers to the questions thrown his way.

Viewers at home were gobsmacked at his luck – which ran out in the end, as chaser Paul Sinha caught him easily in the final chase.