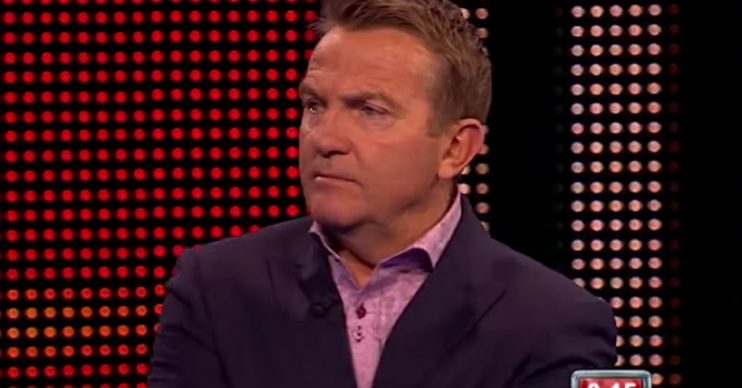 So close to winning £18k

Fans of ITV game show The Chase have accused host Bradley Walsh of ‘fixing’ the closing round in a recent episode so the chaser won.

Earlier this week, a team of contestants made an impressive comeback at the end of the show – only for chaser Mark Labbett to defeat them with just three seconds left.

And according to viewers, it was all because of Bradley.

Ah! It came down to a close Final Chase in the end but ultimately it wasn't enough to take down @MarkLabbett who was outstanding today! We'll see you tomorrow for another episode of #TheChase on @ITV and @WeAreSTV! pic.twitter.com/Srt6HOCF1H

The presenter reads the questions out to both the contestants and the chaser, but some fans of the show think he was reading them more quickly for the latter.

Increasing his reading speed would give the person being quizzed – in this case, The Beast – more time to answer each question.

In the tense final round on Tuesday (05.11.19), hopefuls Marie, Owen and Soozie were hoping to take home a pot of £18k – but they were beaten at the eleventh hour.

Viewers reacted on Twitter, with one writing: “As ever, fixed. Chaser questions were mostly six to 10 words long to save time, questions were easy and Brad speeds up when asking the Chasers questions. And I should know, I’ve been on the show #thechase.”

Another said: “Is ITV ever going to pay out? Notice how Brad reads the chaser’s questions really quickly?”

A third tweeted: “Nah three seconds to go for £18k, Brad is mocking it… he could just read the last questions a little slower.”

As ever, fixed. Chaser questions were mostly 6-10 words long to save time, questions were easy and Brad speeds up when asking the Chasers questions. And I should know, I’ve been on the show #thechase

Are ITV ever going to pay out ???
Notice how Brad, reads the Chasers questions, really quickly ???#thechase

Unfortunately for fans of The Chase, the programme is reportedly being replaced from next week and will not be returning until next year.

The Daily Star reports that the last of the current standard episodes will air on Friday (8.11.19) followed by a celebrity special this Saturday (9.11.19).

But host Bradders isn’t going anywhere, as he’s at the helm of the new show, Cash Trapped.

Starting on Monday (11.11.19), Cash Trapped is described as a ‘game of strategy, knowledge and courage’ featuring six hopefuls all out to win big money.

The contestant who accumulates the most gets the opportunity to take their money and run – and if they succeed, everyone else leaves empty handed.