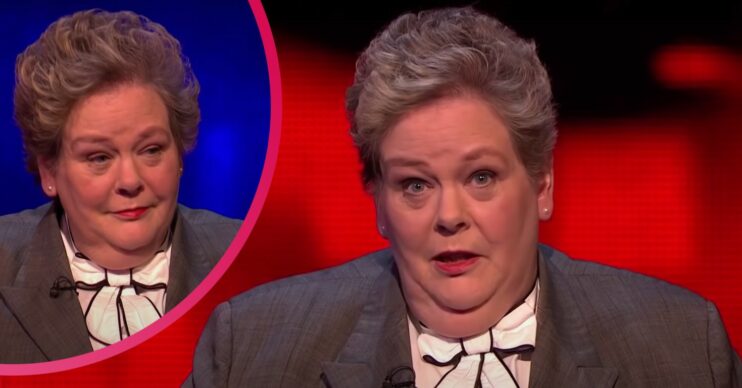 The Chase: Anne Hegerty ‘shut down’ by producer over outfit choice

Had some suggestions which might've made her appear much saucier!

Anne Hegerty of The Chase fame has revealed she’d be in favour of the Governess having a much ‘raunchier’ look.

Anne, a regular on the series since 2010, noted telly bosses passed on previous suggestions to spice up her appearance.

The ITV star also indicated she and producers were not aligned when first picking out a costume for her character.

What would Anne Hegerty like adding to her look for The Chase?

Speaking recently with BBC Radio Manchester, 63-year-old Anne identified what eye-opening adjustments she’d like made to her Governess appearance.

She said: “I really would like my costume to include high heels, fishnet stockings and a whip.

“But they don’t seem to want to go for that.”

Anne also noted how she had a much more sophisticated frock in mind for the Governess than the style she’s associated with.

‘No room for vanity’

Anne recalled: “They sent me with our fashion stylist to a shop to try on some clothes. And the stylist took some pictures and sent them back to the producer.

“When I got back to the studio the producer said: ‘Did you have a nice shopping trip?’

I really would like my costume to include high heels, fishnet stockings and a whip.

On seeing what she would be wearing, Anne remembered thinking to herself: “Right, well, clearly there’s going to be no room for vanity here.”

However, it turns out the Governess’ stern look is rather more upmarket than some viewers might imagine.

Read more: The Chase deaths: A tribute to the stars of the ITV show we’ve loved and lost

“It is just I manage to make it look as if it’s been bought from a charity shop.”