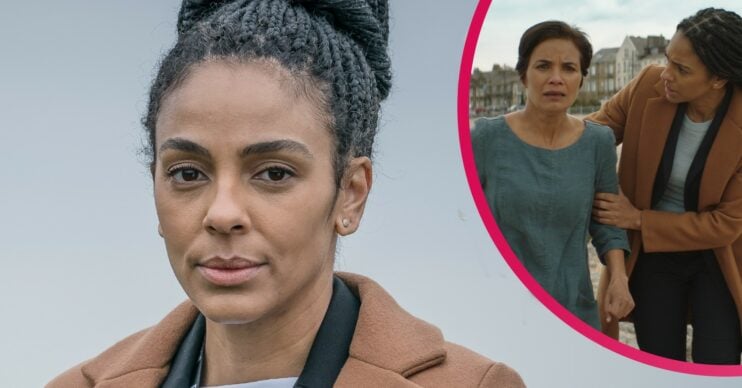 The Bay returned with a big bang this week with episode one – and we mean that quite literally!

Brand new Family Liaison Officer DS Jenn Townsend had a car accident on her way to work, before stumbling upon a murder.

All in the first five minutes!

So what happened in episode one of series three of The Bay?

Here’s our eight burning questions we need answering after watching.

The Bay episode one – who killed Saif Rahman?

Obviously the most pressing question is ‘who killed Saif?’

The promising young boxer was found dead in the sea before the opening credits of episode one of ITV‘s The Bay.

And it’s perfectly clear it wasn’t an accidental drowning.

Saif was found covered in bruises.

Viewers learnt that he was beaten up before his death, with a blunt instrument.

So far, the police are investigating a bunch of thugs who had a fight with Saif on the night he died.

But that’s way too obvious!

The Bay episode one – what’s the beef between Mariam and Adnan?

Saif’s mum Mariam makes it clear that her relationship with son Adnan is a troubled one.

After hearing of son Saif’s death, she says of Adnan: “Maybe today he’ll find a way to put us first.”

She later tells him she “stopped asking anything from him”.

So why is Mariam’s relationship with her son so fractured?

And is it anything to do with golden boy Saif?

Read more: The Bay series three on ITV1: How many episodes is it, what’ it about and what happened to DS Lisa Armstrong?

The Bay episode one – what is DS Jenn Townsend hiding?

In The Bay series three episode one, we’re told that DS Lisa Armstrong – played by Morven Christie – is now working with the NCA (National Crime Agency).

DS Karen Hobson explains that Lisa’s “kids were growing up, moving on, and Lisa decided it was time for a change”.

As for DS Townsend, she has uprooted her family seemingly to be closer to her boyfriend Chris Fisher.

But there’s clearly something not quite right about Jenn.

She is hiding something from her past.

Jenn – played by Marsha Thomason – was on a fast-track to a promotion in Manchester, but gave it all up to move to Morecambe Bay.

Her explanation? Personal reasons. But what are they?

We know she took a leave of absence several years ago, but why?

What happened in Jenn’s past?

The Bay episode one – when will Clarkey get the sack?

DS James Clarke – aka Clarkey – is the character we all love to hate.

In truth, he’s great to watch, but he’s the sort of git we’d HATE to work with in real life!

Surely, it’s only a matter of time before his career comes to a premature end?

Where is Saif’s phone?

Saif’s phone is still missing, and it’s a crucial piece of evidence.

Has it sunk to the bottom of the deep, blue sea?

Or will it turn up and incriminate someone in a later episode?

The Bay episode one – why is Adnan so damn angry?

Adnan isn’t – so far – a character that makes us feel very warm and fuzzy.

He’s like a gargoyle chewing a wasp chewing a very sour sweet.

But why is he so furious all the time?

There’s clearly angst in his family.

But why did he have to be so rude to Jenn?

All will be revealed we hope!

Why did Saif keep his girlfriend a secret?

Saif had a girlfriend called Molly, who he kept a secret from his family.

Saif and Molly had been together for six months before he was murdered.

That’s a long time to keep someone away…

Who is the mysterious girl in the pink hoodie?

When DI Manning and narky Clarkey visited the boxing club where Saif trained, a mystery girl was quick to scarper.

A young boxer with braids and a pink tank hoodie looked like she had something to hide.

She grabbed her belongings and left as soon as she could.

Who is the girl, what’s her connection to Saif, and does she more about his murder than we do!?

The Bay series three continues on Wednesday January 19 2022 at 9pm on ITV1.

What did you think of Marsha Thomason’s debut as DS Jenn Townsend? Leave us a comment on our Facebook page @EntertainmentDailyFix.