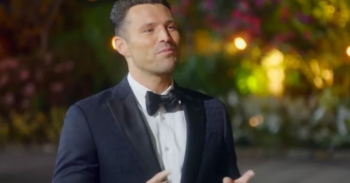 Fans are asking: "Love Island Who?"

Only one episode of The Bachelor UK has aired but fans are already branding it ‘the new Love Island’.

The new channel 5 series was met with huge praise last night and viewers are hooked!

The dating show, hosted by Mark Wright, sees a group of single women compete to win the affection of bachelor Alex Marks.

And the drama kicked off straight away as four girls were sent home in a surprise twist.

Two of the 17 women were booted out before even meeting Alex, as the group voted for who they thought was in the competition for the wrong reasons.

Alex then had to ditch two more of the lovely ladies at the end of the episode.

He chose to send home Chloe and Lois – and emotions ran high despite them only knowing each other for a matter of days!

Viewers took to social media to hail the new show a triumph and compare it to Love Island.

The Bachelor format has already been a big success in the US and Australia.

One rather excited viewer commented: “GUYSSSS this show is great. I love it. Love Island who? jkiloveLoveIslandpls #TheBachelorUK.”

A third wrote: “I hope this settles my Love Island withdrawal #TheBachelorUK,” while a fourth added: “#TheBachelorUK my new 10pm addiction.”

GUYSSSS this show is great. I love it. Love Island who? jkiloveLoveIslandpls #TheBachelorUK

I hope this settles my Love Island withdrawal #TheBachelorUK

Presenter Mark, 32, thanked fans for all their support for the show. And he couldn’t contain his excitement about the first episode, either.

Read more: Mark Wright reveals he turned down offer to be The Bachelor

The former TOWIE star, who is married to Michelle Keegan, joked on Twitter: “Omg !! I know what happens and I’m still watching between my fingers #TheBachelorUK.”

Omg !! I know what happens and I’m still watching between my fingers #TheBachelorUK

The action continues tonight at 10.15pm on Channel 5.

Will you be tuning in? Leave us a comment on our Facebook page @EntertainmentDailyFix and let us know what you think.