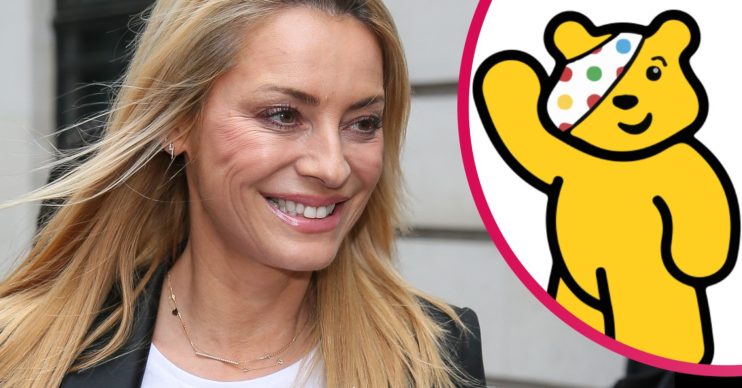 Tells fans it is 'time to pass the presenting baton'

Tess Daly has told fans she will no longer be presenting the BBC’s Children In Need telethon coverage.

She has fronted the charity’s TV appeal alongside the likes of Terry Wogan since 2008.

Other stars she has presented Children In Need with include Ade Adepitan and Fearne Cotton.

Tess, 51, told her 500,000 Instagram followers this afternoon (Monday, September 7) it is ‘time to pass the presenting baton’.

She also shared several snaps from her time on the programme over the years, including a pose with Pudsey Bear.

In the post’s caption, Tess said it had been a “privilege” to be involved in Children In Need.

It’s time to pass the presenting baton over.

She wrote: “For the past 11 years I’ve had the great privilege of presenting Children In Need alongside brilliant presenters and an amazing team.

“Pudsey and what he represents will always hold a special place in my heart but it’s time to pass the presenting baton over as the show reaches it’s amazing 40-year milestone.

“That’s four decades of the British public donating and heroically fundraising over £1bn towards changing children’s lives for the better.”

Tess maintained she will still be involved with the charity, even if it isn’t on TV.

“But Children In Need isn’t just annual event,” she continued.

“It works tirelessly all year round. And I’m excited that I will continue to work alongside some of the vitally important projects that this extraordinary charity supports, seeing first-hand what a profound affect these unprecedented times have had, and to find out what more we can do to help.”

Fans were quick to say how sad they are to see Tess go – but also thanked her for all her efforts.

Many also said they would miss her on the charity show.

“Ahhhhh we will miss that gorgeous face with Pudsey,” commented one fan. “Well done on such an amazing 11 years.”

And a third remarked: “Clap clap clap for all you’ve done.”

Another fan noted they hoped to see more of Tess on the Beeb in the future.

“You are underused by the BBC,” they said. “You should be on TV on a more regular basis.”