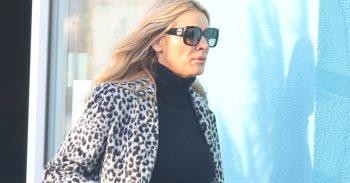 Devastated presenter has said it's a dog owner's worst nightmare

The Strictly Come Dancing presenter has been left heartbroken after she accidentally ran over her Maltese Shih Tzu pup when she returned home after builders left a door open and allowed the pooch to escape and run under her vehicle without her noticing.

She told The Sun on Sunday newspaper: “I’m devastated by this terrible accident. It’s a dog owner’s worst nightmare.

“It has had a huge effect on the whole family and we are heartbroken at losing Minnie. This has, and continues to be, a very emotional time for us all.”

The accident happened as Tess, 49, was returning home to her Buckinghamshire mansion in her range rover, and the star says she was unaware Minnie had been let out of the house and didn’t have time to react as the small pup suddenly ran under her front wheels.

Tess, her husband and TV star Vernon Kay, and their two daughters Phoebe, 14, and Amber, nine, are all heartbroken by the tragedy, which occurred last month shortly before the family were due to fly to the Maldives to celebrate Tess’ upcoming 50th birthday.

A source added: “Tess is absolutely beyond heartbroken.

“She and Vernon have drummed it into the girls that they must never, ever let the dogs out and sure enough, the animals always stayed indoors.

“But they have had the builders in, carrying out various bits of repair work in the courtyard. And one of the labourers foolishly left the front door open – and Minnie escaped.

“Tess had been out for the morning and as she drove back in and up the driveway she was too high up in her 4×4 to see Minnie suddenly bolt out.

“It all happened in a flash and there was absolutely nothing she could do. But it was sickening.

“Minnie was like another child to Tess and Vernon and to lose a member of the family in such a tragic, hideous way is understandably devastating.”