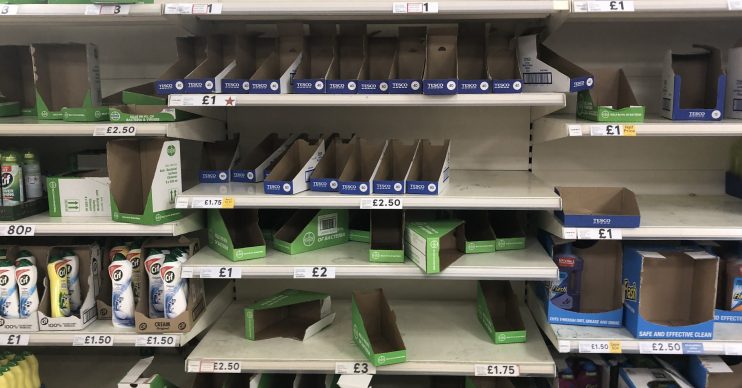 Hand sanitiser, baked beans and Calpol are all popular with stockpilers

Tesco has reportedly imposed a ‘five items only’ rule on some of its goods, in response to people panic-buying amid the coronavirus outbreak.

According to the Mail Online, the supermarket chain is preventing people from bulk-purchasing items such as hand sanitiser, baked beans and the children’s medicine Calpol, to ensure that supplies don’t run out.

In the past few days, stores across the country have had their shelves stripped by worried customers as the deadly virus spreads.

There have even been reports of people selling items such as toilet rolls on the black market in an attempt to cash in on the crisis.

Over the weekend, the number of infected patients in the UK has risen to more than 200, and scientists have warned that the figure could double on a daily basis.

That increases the likelihood of people having to go into quarantine, and faced with the possibility of having to spend days or even weeks at home, people aren’t taking any chances.

There have been numerous pictures posted on social media of consumers filling up their baskets and trollies with toilet rolls, frozen goods and other essentials.

And customers have been complaining that queues are much longer than usual as people seek to stock their cupboards.

But the panic-buying has started to take its toll on supermarket chains, and bosses have seemingly decided to take action.

According to the Mail Online, ‘disaster goods’ such as pasta, UHT milk and tinned foods are all on the hit list.

Tesco are said to have brought in the new rule on Saturday, with the restrictions hitting online shoppers from today.

According to reports, customers will be unable to select more than five items of each of the affected products.

The coronavirus – known as Covid-19 – is now believed to have spread to 86 countries worldwide.

Most regions of the UK have reported cases, with two people here having died of the illness so far.

There has been talk of schools and offices closing to try and stop the spread of the disease, while organisers of major sporting events have also been taking precautions.

At the rugby match between England and Wales at Twickenham yesterday, hand sanitisers were distributed around the stadium to help prevent the spread of germs.

Meanwhile, it’s been reported that up to 16 million people in northern Italy may be quarantined to try and control the disease there.

Italy has so far been one of the worst-hit countries, with around 200 deaths having been reported.