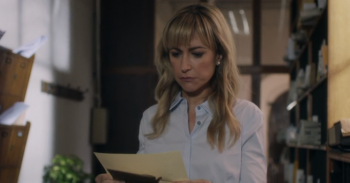 ITV’s hit drama Cheat reached its tense conclusion last night, and while many of the series’ most burning questions were answered, others were left up to the viewers’ imagination.

In the final episode, conflict between Leah (played by Coronation Street actress Katherine Kelly) and Rose (Molly Windsor) boiled over following Adam’s death at the end of the previous episode.

Rose was the obvious suspect and yet Leah was the one who the police arrested.

As it seemed Leah would go down for Adam’s murder, her dad Michael (Peter Firth) worked with the police to get the truth from Rose, who admitted she killed Adam in self-defence when he tried to strangle her.

Flashing forward a couple of years, Rose was in prison for the crime and had months left on her sentence.

Leah, determined to find out what actually happened on the night her husband was stabbed to death, went to see Rose and question her.

Rose told her that, really, she murdered Adam in cold blood with a view to framing Leah. She even called in Ben to leave marks on her neck so she could claim the deed was done in self-defence, should she be caught.

We eventually saw Leah tell Rose that she wanted nothing more to do with her.

She was working to repair her relationship with her dad Michael, even introducing him to her little boy.

But in the closing scenes, Rose told Leah in a letter that she was working on sorting herself out – all while her lackey, Ben, appeared to off William’s dog as he targeted him for the kill.

The Cheat finale had many of us wanting more, and while certain elements were wrapped up, others were left hanging and new questions arose.

Here are six things we were dying to know!

1) Will Rose go down for longer after her confession to Leah?

Rose only got two years for Adam’s manslaughter as police were convinced, due to the careful steps Rose took, that the killing was done in self-defence.

But Rose admitted to Leah that it was all in cold blood. Will Leah try to have Rose put away for longer, now that she knows the truth?

Possibly not. Rose told Leah in a letter that she was taking her advice and fixing her problems, and while the viewers know she’s lying, Leah might be willing to give her the benefit of the doubt.

2) Did Rose kill Betsy the cat?

But did Rose actually kill her? We always assumed she did but, in the closing closing scenes of the finale, Ben appeared to kill William’s dog.

Now we know what he’s capable of, could Ben have murdered Betsy too?

3) Why did Ben do Rose’s bidding so faithfully?

It wasn’t always clear but Ben appeared to have acted as a faithful assistant and henchman for Rose throughout the series.

Why exactly did he do everything she told him to so faithfully? To the point that he’s willing to help her lie to the police and even, as we saw at the close, kill a man?

Ben went after William, as he walked his dog Hunter in the woods, with murder on his mind. We heard William’s pooch yelp and saw Ben standing hidden, knife in hand, waiting for William.

But did Ben get him? We may never know.

5) Did Rose actually cheat on her essay?

Hilariously, viewers were left wondering this even after everything that happened.

Despite all the adultery, murder, pet killing and police investigation, people still wanted to know whether or not Rose cheated on her assignment in the first place.

6) Will there be a second series?

Whether or not any of these questions are answered will depend on ITV running a second series.

Fans might be hoping that, given the series’ success, the broadcaster will be tempted to make a follow-up.

But unfortunately, it doesn’t look likely as an ITV spokesperson told The Sun: “Cheat was conceived as a self-contained four part drama. There’s been no talk of another season as it was only ever planned as a standalone series.”

At least that’s not a definite ‘no’!

Twitter exploded after the finale aired as viewers demanded answers.

So many unanswered questions. Why did the porter do everything Rose asked unquestioningly? Are prison visits not supervised? Why kill another pet? And most importantly DID SHE CHEAT?! #Cheat

I still have unanswered questions #Cheat 1. Did Rose really cheat on her essay as i was thinking her dad could of wrote it 2. How did Rose get the picture of leah and her dad 3. Why did Rose hate her auntie pam so much

I need to know what happens next, does he kill her dad? What does she do when she comes out of prison? Did he actually kill his dog? So many questions that need answering, I'm praying for a second series #Cheat

Question: why would Ben kill her "dad"? Weird ending 🤔 #cheat

did rose really cheat on the essay? did the dog or the dad die at the end? what the hell was ben’s problem and why did rose have so much control over him? have just as many questions as i did at the start of the series ffs #Cheat

Did he kill the dog or the so called father? Twisted series so many questions unanswered but loved it #Cheat

– All four episodes of Cheat are available to watch now on ITV Hub.

Did you enjoy Cheat? Leave us a comment on our Facebook page @EntertainmentDailyFix and let us know what you think of this story.