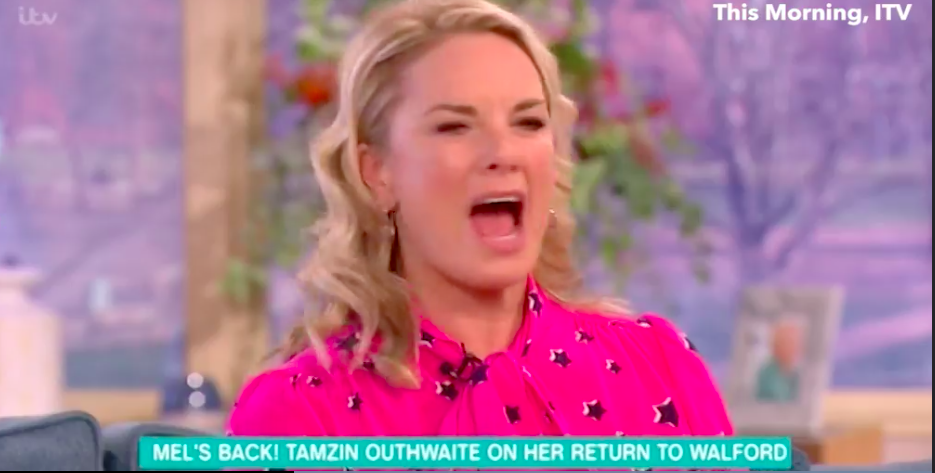 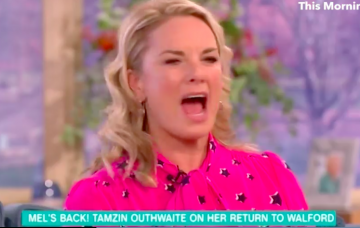 She made the blunder just a few weeks after starting on EastEnders almost 20 years ago!

EastEnders star Tamzin Outhwaite, who plays Melanie Owen, had Phil and Holly in stitches during today’s This Morning by telling a story about an embarrassing gaffe she made when she first started on the soap back in 1998.

Tamzin, who was on the show to talk about Mel’s dramatic return to Walford, explained that she had not been on the soap very long when Christmas approached.

She’d written all her Christmas cards and was so busy filming on EastEnders that she thought she could kill two birds with one stone.

“I thought, ‘I’ll go down and film this scene on the lot, and I’ll pop all my Christmas cards in the letter box there,” Tamzin said, as Phil and Holly began to giggle.

Read more: Lorraine Kelly left red-faced after a dog poos in the studio

“So I did, I put them all in the post box and I thought ‘brilliant’.”

Phil and Holly were in stitches as Tamzin explained she’d posted all her cards in a fake post box on the Albert Square set.

“I asked one of the props guys, I said: ‘How often do they collect from there?’ He looked at me, like, ‘What do you mean?’ I said: ‘The post box. Is it twice a day, once a day, or is it just like once a week? Will they get there in time?'” Tamzin continued.

And he went: ‘It’s not real. Of course it’s not real.’ And then I couldn’t get them out,” she said, in stitches herself at her own silliness. “There’s not even a thing on the back to get stuff out. They’re still in there!”

Phil and Holly collapsed in hysterics as Tamzin recounted the funny story.

Tamzin also revealed that Holly – who is married to Tamzin’s cousin, Dan Baldwin – was one of the first people she told about going back to EastEnders.

“You were really positive,” she said. “You said it’s been 20 years, the timing is perfect.”