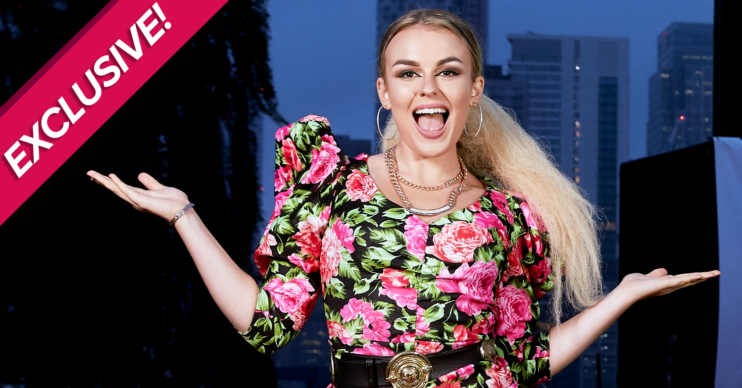 She lives in Jersey with her family

Singer Tallia Storm has spilled the beans about the upcoming series of the Real Housewives of Jersey.

Rumours have been rife about the new ITVBe show, which will be set on Jersey, in the Channel Islands.

Tallia’s family – including parents Tessa and Sascha Hartmann – have lived on the island for the past five years.

And now it’s thought that the family – including Tallia’s sister Tessie and brothers Johnnie and Zachary – could be heading for the small screen.

She told us: “I’m really not allowed to say anything but the thing I keep saying is just to keep your eyes on TV screens and see what happens.”

Tallia did let slip that she had just flown in from Jersey, though, so was she out there filming for the show?

ITV has confirmed filming has already started, after all…

“We’ll have to find out,” she said coyly.

“I think to be fair it’s more, whatever happens on that show, it’s definitely a chance for the housewives to shine,” she added.

Tallia then went on to explain the family have lived in Jersey for five years now.

“It’s stunning, a little safe haven, the people are so friendly, it’s like a little village,” she said.

“The show will be Jersey’s chance to shine.”

While Tallia wouldn’t confirm her involvement, the twinkle in her eye suggested she’ll be heading to a screen near you soon!

What else is Tallia up to?

What she was happy to discuss was her involvement in ITV’s new Celebrity Karaoke Club.

However, she told ED! the “laugh a minute” show wasn’t at all what she was expecting.

“I’ve filmed it already and it had nothing to do with singing,” she laughed.

“I had the biggest disadvantage because it was like a drinking competition. It was who could drink the most alcohol and I’m not good at drinking.

“I never drink, so I drank tequila for the first time in a long time and I couldn’t keep up.”

It had nothing to do with singing. I had the biggest disadvantage because it was like a drinking competition.

Asked if she was planning on showing Simon Cowell what he missed when he dropped her early on in X Factor The Band, Tallia laughed.

“There were no vocals shown, so if Simon Cowell is interested in how much alcohol I can drink it’s not very much, let’s put it that way,” she quipped.

Tallia revealed that she did have to sing on the show, but it’s not about vocals.

“It’s about who can be the most fun.

“I know how far I got but let’s just say it was a laugh a minute – and if I say any more I’ll get killed,” she said.

One good thing did come out of the show, though, a friendship with Scarlett Moffatt of Gogglebox fame.

“I love her, I think she is one of the funniest, kindest, down-to-earth people I’ve ever met.

“She’s just real, you really miss that these days, people who genuinely just want to get to know you.”

Real Housewives of Jersey will be on ITVBe later this year.