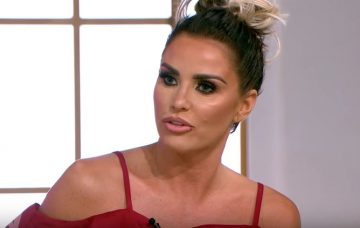 Katie Price takes swipe at ex… but which one?

Katie Price has appeared to make a dig at estranged husband Kieran Hayler, after he liked a racy bikini photo of Love Island star Kady McDermott on Instagram recently.

Earlier this week, Kieran liked a snap of Kady showcasing her super toned bod in a hot leather two-piece bikini.

And it seems it didn’t go unnoticed by Pricey, who shared a cyrptic message on Instagram Thursday hinting that she doesn’t care what her ex gets up to.

Read more: Katie Price thanks surgeon for her “new face”

She shared a quote which read: “I don’t care if my ex upgrades, downgrades, moves to the left or to the right.

Four years ago, Katie banned Kieran from using social media after she discovered he had cheated on her with her best friend Jane Pountney.

Katie famously gave Hayler a second chance in 2014 and allowed Kieran to return to social media in 2017.

Katie, 39, captioned the clip: “Hey follow my hubby, it’s been 4 years since he was last on, I love him so much. He will post different stuff to me.”

Kieran has since devoted his Instagram to sharing sweet family snaps but it seems his latest Insta antics have left him in the dog house.

Kieran and Katie announced their plans to divorce last summer after Kieran was caught cheating with their nanny Nikki Brown.

But despite Katie’s heartbreak and their split, Kieran is still staying in their house with their kids.

Speaking to OK! magazine recently, Katie said she was “sick to death of having to justify” Kieran still living in their home.

“People are always speculating about whether we’re together or not, and yes, he’s obviously in the house,” she said.

“He’s got mental health problems, he’s sorting it out. He’s got deeper issues.”

Katie had an incredibly difficult year in 2017. Shortly after discovering Kieran had done the dirty, she was told her beloved mum has been diagnosed with a terminal lung condition.

She recently told OK!: “Last year was one of the most stressful years I’ve ever had and there are things that happened which people don’t even know.

“My next book is going to be unbelievable. There’s some horrible stuff that’s happened. I deserve this year to be a good year after what I’ve been through.”

Will you be reading Katie’s next book? Leave us a comment on our Facebook page @EntertainmentDailyFix and let us know what you think!