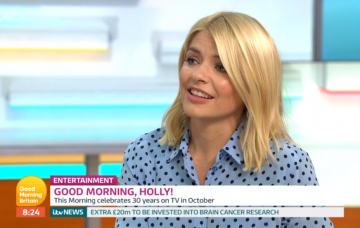 The This Morning star appeared on Monday's show

But during the chat, Holly, 37, saw the perfect opportunity to take a cheeky swipe at Piers Morgan by telling Susanna Reid she “feels sorry” for her having to work with Piers!

Read more: Holly Willoughby says one man is enough for her!

Last week, sexuality expert Deanne Carson said that parents should ask their babies for consent before changing their nappies.

Weighing in on the debate, Holly – who is a mum of three – said: “I think you’ve got to start with the assumption that we’re not all going to molest our children.

“It’s got to come from that place of love, which is a natural thing. I think it’s good to talk to your baby while you change the nappy, it makes that connection.”

Meanwhile, Charlotte said she’s not in favour of asking for consent, but said: “There was something in that respecting someone’s body. Saying I’m changing your nappy rather than grabbing them and just changing.”

As Piers and Charlotte started to argue about their different opinions, Susanna attempted to end the debate, saying: “Anyway Holly…”

Holly chimed in: “I feel sorry for [Susanna]! I watch all the time and I look at Susanna’s little face! It’s so unfair.”

Charlotte added: “That pained look,” as Holly said: “It is! Yes, all the time!”

“It’s actually a look of adoration,” Piers told Holly. “She hides it well.”

“I’m not sure it is Piers! You’re wrong!” Holly replied.

Earlier on in the show, Piers clashed with Deanne, after she suggested parents should ask their baby for consent before changing their nappy.

“Your way is… I’m going to be the father. You’re one of my children. So you’re three months old and don’t speak a word of anything. You gurgle, you break wind.”

What is your opinion on the nappy consent debate? Leave us a comment on our Facebook page @EntertainmentDailyFix and let us know what you think!