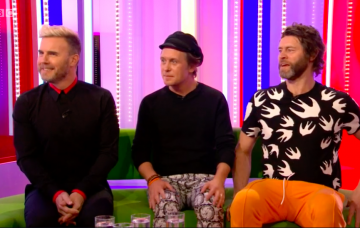 Drop everything and dust off your old CDs – because Take That are coming back with a massive WORLD TOUR!

The nineties group confirmed the epic news on The One Show.

Speaking to presenters Matt Baker and Alex Jones, the three remaining members of the original boyband, Gary Barlow, Howard Donald and Mark Owen, were talking about their new stage musical The Band, which is touring the UK this spring.

Alex, 41, asked the trio if a Greatest Hits album and tour would happen.

There have been rumours of the tour for a while, as the band celebrate their 30th anniversary.

Howard, 49, continued: “We’re actually recreating some of the songs for the Greatest Hits.

“We’ve got three new songs that we’re going to put on the Greatest Hits. So we want to go to all of the territories that we’ve never been to before, like South America.”

Gary added: “We’ve upgraded some of the mixes, and reimagined some of the songs, but not all of them. You’ve got to be careful with these things. If you take them too far, you destroy people’s memories.

“We’ve tried to be respectful to the music, but just y’know, putting a load of music on an album wasn’t enough for us. We wanted to just go back and have a look through it, and try to make it sound better.”

They didn’t comment on whether ex-band members Robbie Williams and Jason Orange – who left the band in September 2014 – would be involved.

There will also be a Greatest Hits album, which is likely to be released this Christmas.

Read more: Robbie Williams says he’s “got a disease that wants to kill me” as he discusses mental health

If that’s not enough nostalgia for you, check out the amazing throwback snaps Gary’s been sharing on Instagram recently.

Last month he shared a picture of himself, with his wife Dawn. It shows the youthful-looking pair a whopping 23 years ago, snuggled up together on a very 90s-looking sofa.

Gary, who is also going on his own solo tour, starting in Edinburgh next month, captioned the image: “Happy wedding anniversary Mrs. B. 18 fabulous years together. Stronger than we’ve ever been. Here’s to the rest of our lives. Pic taken 1995. #foreverlove.”

The shot was taken a whole five years before the pair got married, as Gary and Dawn tied the knot in 2000.

Will you be buying tickets? Leave us a comment on our Facebook page @EntertainmentDailyFix and let us know what you think!