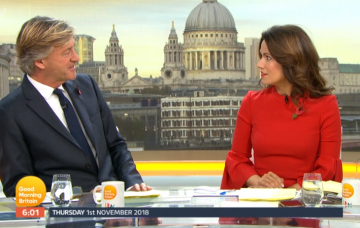 He said she looked amazing!

Opening the show, Richard – who was filling in for Piers Morgan – was quick to compliment Susanna, 47, on the amount of weight she’s lost since he was last on the show.

But it seems Susanna wasn’t quite expecting his comment as she looked visibly stunned.

Richard told viewers: “Well good morning, it’s just gone 6 o’clock and welcome to the programme, it’s nice to be back.”

Susanna said: “It’s great to have you back.”

Turning to Susanna, Richard added: “Haven’t you lost some weight since I was last here!”

Clearly stunned by his remark, Susanna’s eyes widened as she giggled.

Richard asked: “Was it hard work?”

A flustered Susanna replied: “I just stopped eating so much. It was sort of straightforward. I did fall off the wagon and Richard Arnold said, ‘Yay, she’s back on the sauce!'”

Susanna insisted she’s still given up alcohol and said she tends not to talk about her weight.

She then pointed out that Richard was sporting a slightly fuller stubble.

In September, Susanna revealed she had lost one stone over the summer since she’s stopped drinking alcohol.

Her co-star Piers said on the show: “We’ve got a reaction to Susanna’s revelation that she is on a dry September.

However, Susanna then mouthed to the camera that she has actually lost 14 pounds.

During another episode of the show later in the month, Susanna revealed she had been told by her doctor that she would benefit from losing a bit of weight.

Speaking about why she chose to lose weight, she told Piers: “It was a combination of factors, but a doctor said I was at the top end of my BMI.

“He said it might benefit me if I lost a little weight.”