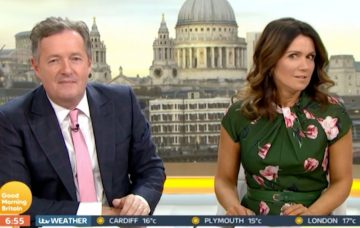 Guest suggests that the pair argue like a married couple

Criminal lawyer Jerry Hayes, who was a guest on the show, quipped the pair should marry after witnessing them arguing during the ad break.

Read more: Piers Morgan reveals what it would take to defect to BBC

Susanna was left mute with shock after the comment, which came in the middle of a debate about the ethics of shaming someone to make them lose weight.

After witnessing Susanna and Piers bickering, news presenter Charlotte Hawkins chimed in, saying that the pair had been arguing about this during the break, and that Jerry had commented that he thought they only fought like that for TV.

“I know!” he said, before using a clichéd joke about marriage to comment on the pair’s relationship.

“You two should get married, no sex and lots of rows,” he said.

Susanna was left speechless with shock after the comment, as Piers quipped that he’d rather do things the other way round.

Fans tweeted about the suggestion, with one commenting about the look on Susanna’s face.

Obviously, it was all just banter as Piers is very happily married to wife Celia Walden, who is good friends with Susanna.

Piers and Susanna had been debating his open letter to plus size model Tess Holliday, who he called “deluded” for claiming she was happy with her body.

Tess was the first plus size model to feature on the cover of Cosmopolitan magazine – a move that has been hailed by many as a step forward for the body positivity movement.

But Piers wrote an open letter for the Mail Online, insisting that Tess’s cover shoot shouldn’t be celebrated, saying she was “massively, dangerously overweight yet feigning joy.”

Susanna said on the show this morning that it’s important to acknowledge different kinds of bodies.

“We have to acknowledge that not everybody looks the same,” she said, “and we should celebrate the difference in people’s bodies, and not fat-shame, hoping that that’s going to lead someone to suddenly lose all the weight that you’ve decided that in your medical opinion is unhealthy.”

Piers hit back, claiming that any doctor would say that being too heavy is unhealthy, and saying of Tess “I would like to celebrate her losing weight and making herself more healthy.”