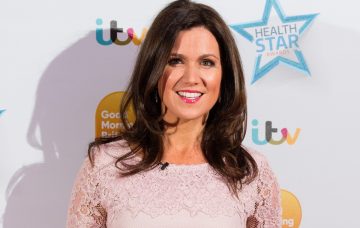 She's back on the market!

The presenter split from her long-term partner Dominic Cotton back in 2014, and hasn’t had a relationship since – choosing to focus instead on her career, and on raising her three sons.

Read more: Shirley Ballas fires back at Strictly fans for criticising her marking

But four years on, the 47-year-old has said that she’s ready to get back in the game.

Speaking to You Magazine, she said that now her children are teenagers, she’s ready to start dating again.

“This is the right time of my life to explore that now,” she said. “I’ve spent a significant amount of time since the split focused on the children and on work.”

She said that since her kids had become more independent, she felt comfortable exploring her own social life outside of them.

“My children are all teenagers now – they’re much more independent. They do things after school, they’ve got loads of friends, so I think they encouraged me to think about developing that side of my life a little bit more.”

While she’s decided to keep her dating life purely analog – she won’t be signing up for Tinder any time soon – she said that the idea of dating non-exclusively is helpful.

“The great thing about what’s happened in 2018, and everyone will have seen it on Love Island, is you don’t have to date exclusively any more,” she said.

She and sports corresponded ex Dominic have remained good friends in the years since their split, and have been dedicated to co-parenting their children, 16-year-old Sam, 14-year-old Finn, and 13-year-old Jack.

Susanna claimed that, although they were together for 16 years, she and Dominic never got married, claiming her own parents’ divorce put her off marriage.

How much time do you think you should stay single after a break up? Leave us a comment on our Facebook page @EntertainmentDailyFix and let us know what you think!