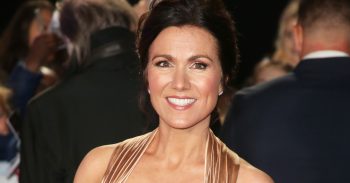 Susanna Reid has revealed she’s split from her boyfriend Steve Parish after nine months of dating.

During today’s Good Morning Britain, the presenter insisted she was “fine” as her co-star Piers Morgan quizzed her on the break-up from Crystal Palace chairman Steve.

Trying to change the conversation Susanna said: “You had an interesting match over the weekend. In fact you’ve had three.

“I know one of the things you’re most devastated with is the fact you will no longer have access to the wine cellar.”

Piers then asked Susanna whether she revealed her split to coincide with his return to GMB today.

She joked: “Yes Piers, it’s all down to you. These things happen.”

Susanna began dating Steve last year, which was her first public relationship since her split from ex Dominic Cotton in 2014.

Speaking about her relationship with Steve in December last year, Susanna told The Sun: “I’m happy and it’s nice, it was really important to me, post the split with [former partner] Dom, that I focused on work and the children.

“So, yeah, I did that, and obviously they are still the major focuses of my life.”

In January, Susanna said she was “very happy” with Steve, but insisted she had no plans to walk down the aisle any time soon.

She told the Daily Mail: “It’s not a secret, but it’s private. But I’m happy. Very happy. I’m having fun.

“I am very, very happy at the moment, but I don’t want to be married. No, no, no. I think the focus should be on the relationship.”