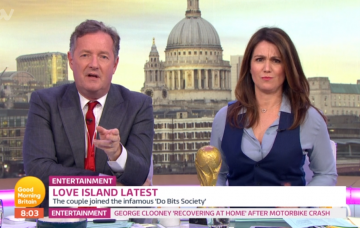 Susanna Reid told Piers Morgan to “stop talking” as he interrupted Richard Arnold during his Love Island segment on Wednesday’s This Morning.

As showbiz correspondent Richard discussed the latest gossip from the villa, Piers couldn’t resist but showcase more of his infamous impressions of the show’s contestants.

Richard was trying to speak about Tuesday night’s episode, which saw islanders Wes Nelson and Megan Barton-Hanson get steamy under the sheets.

But, of course, Piers took the opportunity to mock the islanders’ conversation after Megan and Wes’ big night.

He said: “Bits were most definitely done. You look fresh babes.”

Susanna, 47, told Richard: “He’s wearing his jealousy all over him, isn’t he?”

But as Richard started to speak, Piers interrupted him again.

He shouted: “Richard, how can you speak about this in a serious way?”

Richard hit back: “Because I’m paid to do it!”

Susanna and Piers went on to argue about their opinions of the ITV2 reality show.

As fans know, Piers can’t bear to watch the show while Susanna is definitely a hardcore fan.

After a clip from last night’s episode of Love Island was played, Piers said: “Why don’t we criminalise wolf-whistling because that’s the real problem in this country.”

Defending the contestants, Susanna hit back: “You want to criminalise having sex?”

Piers replied: “I want to criminalise these idiots for being idiots on national television and talking about ‘doing bits’.”

Susanna said: “You want to talk to the boss about that? It’s the biggest programme on at 9 o’clock.”

Piers responded: “That doesn’t make it a force of good, does it?

“How can you as a conscientious, good mother of three children….”

Piers continued: “No, I’m asking you a question. How can you watch that [Love Island] and think it’s a good thing to be promoting having sex on TV with complete strangers.”

Susanna hit back: “They’re not complete strangers, they’ve got to know each other.”

Piers added: “What is the name for people who basically have sex to make money for themselves?”

Susanna said: “They’re not having sex to make money. How do you know that?”

Piers responded: “The ones who have sex have more money.”

Do you agree with Piers’ comments? Leave us a comment on our Facebook page @EntertainmentDailyFix and let us know what you think!