Susan Calman keeps Strictly promise to get a tattoo!

Comedian struck to her word!

When she appeared on Strictly Come Dancing last year, Susan Calman promised to get a tattoo if viewers kept voting her in.

The comedian was determined to make it to Blackpool in week eight of the competition with professional dance partner Kevin Clifton.

She vowed that if they made it, she’d get an “I love Grimsby” tattoo in honour of Kevin’s home town.

And after she did indeed get to dance in Blackpool, she’s now gone and done it! 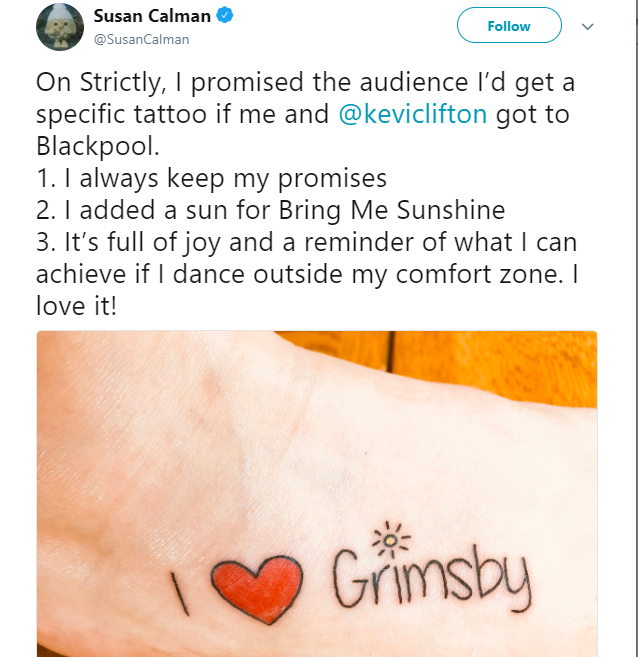 Sharing an image on Twitter of the body art on her foot, she wrote: “On Strictly, I promised the audience I’d get a specific tattoo if me and @keviclifton got to Blackpool.

“1. I always keep my promises

“2. I added a sun for Bring Me Sunshine

“3. It’s full of joy and a reminder of what I can achieve if I dance outside my comfort zone. I love it!”

Susan and Kevin did a quick-step to Bring Me Sunshine on the series, where she was eventually voted off in week nine after facing singer Alexandra Burke in the dance off.

Susan’s fans were delighted to see that she’d kept her promise and praised her integrity and bravery in getting the tattoo.

“I love it!!!! It’s a sign of the sunshine and joy you and Kevin bought to Strictly last year and the tour this year. (Can you come back and do it again? ) Fab-u-lous,” said one.

“A woman of your word! Respect! (Oh and it looks lovely),” wrote another.

“Fabulous!!!! You brought so much joy to us #strictlyviewers,” a third told her.

A fourth gushed: “Awww I just love this and all that it stands for! #love #friendship #courage and what you can achieve when you put yr mind heart and soul to it!!”

Read more: Michelle Keegan says LA is “too far away” to move permanently

Among the commenters was Kevin, who retweeted the image of the tattoo writing: “There’s just nobody more awesome than my friend @SusanCalman.” 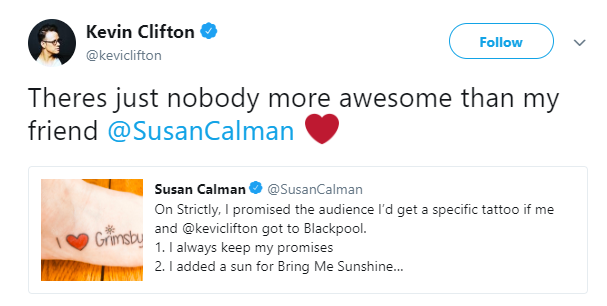 His sister and former Strictly star Joanne also shared her delight over the inking tweeting: “This is EVERYTHING !!!!” 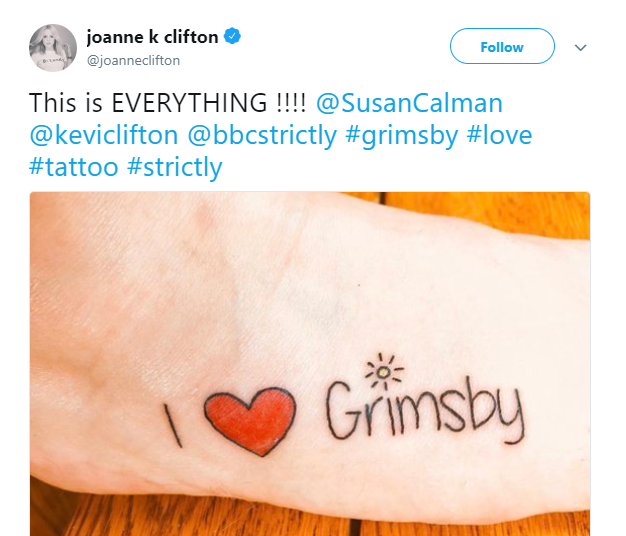 Some of their fans pointed out that Kevin had also joked about getting a similar tattoo if the pair made it to Blackpool but he’s stayed quiet on that matter!

Meanwhile, Susan, 43, quipped that her tattoo is making her feel “quite badass”. 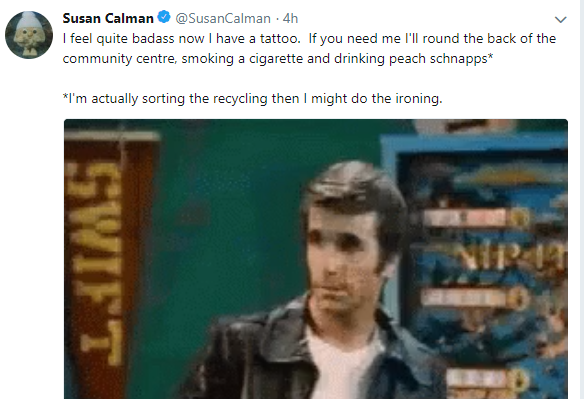 Alongside a gif of The Fonz from Happy Days, she wrote: “I feel quite badass now I have a tattoo. If you need me I’ll be round the back of the community centre, smoking a cigarette and drinking peach schnapps* *I’m actually sorting the recycling then I might do the ironing.”