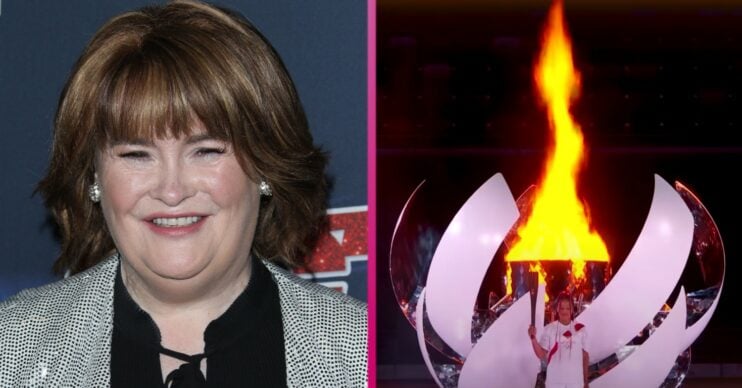 Described her participation as a "true honour"

The much-loved singer, 60, had a role in Friday’s kick off event, delighting fans around the globe.

And Susan, who shot to fame in 2009, clearly loved being part of it.

She described participating in the event on Twitter as a “true honour”.

What did Susan Boyle do in the Olympics opening ceremony?

Susan’s voice accompanied the release of paper doves in the Tokyo Olympic Stadium.

They fell like confetti on the athletes assembled in the venue, which was otherwise largely empty due to coronavirus precautions.

Read more: Helen Glover: The Mother of All Comebacks: Who is the Olympic rower?

Her version of Wings To Fly played through the speakers for the moving moment.

According to some Twitter commenters, the song was a bonus track on the Japan release of I Dreamed A Dream.

The unexpected use of Susan’s vocals left many of those watching at home astonished – but also delighted.

Who had Susan Boyle as part of the Tokyo Opening Ceremony on their 2021 bingo card?!

“That was so beautiful Susan Boyle to hear you sing at the Olympics,” tweeted one fan.

Other onlookers couldn’t believe the Scottish star had a presence in Japan at all.

Another agreed: “Susan Boyle and the Tokyo Olympics are not a pair I would have put together but there we go.”

And a third person echoed: “Susan Boyle singing at the Japanese Olympic opening ceremony. Who’d have thunk it?”

Meanwhile, someone else joked about the unlikely moment: “Who had Susan Boyle as part of the Tokyo Opening Ceremony on their 2021 bingo card?! #bbcolympics.”

And yet another person remarked: “I never thought I’d see the day when Susan Boyle and Sonic the Hedgehog were on the same bill. #Tokyo2020.”

Yesterday evening, Susan wished all of the competitors well as she reflected on being part of the show.

She tweeted: “It was a true honour to be asked by the Tokyo Olympics to use my song ‘Wings To Fly’ during the dove release at the Opening Ceremony.

“Good luck to all of the athletes competing and especially to Team GB.”