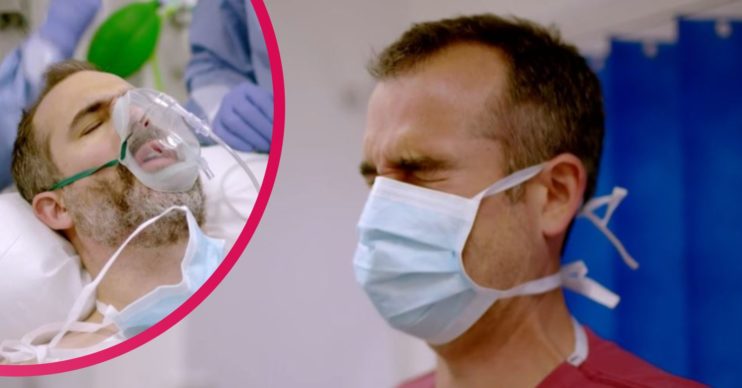 Surviving the Virus: Viewers ‘speechless’ as man breaks down seeing his twin flatline

The effects of coronavirus

Surviving the Virus left viewers speechless with an emotional scene of a man flatlining on a hospital bed.

The documentary, aired on BBC One last night (Wednesday, August 5), followed twins Chris and Xand van Tulleken, both of whom are doctors.

What happened on Surviving the Virus: My Brother & Me?

It showed them coming to grips with the coronavirus pandemic on a personal as well as professional level.

Xand contracted the deadly bug in March of this year and it left him with an irregular heartbeat.

The programme included one scene in which Xand was sedated so that doctors could send a shock through his body, as part of the treatment for his heart issue.

Chris watched on nervously as Xand, lying on a hospital bed, suddenly gasped and jolted as the shock ran through him.

In the seconds immediately after, the electrocardiogram gave a continuous beep, showing that Xand’s heart had fully stopped.

Doctors tended to him and he came around. Watching on, Chris broke down sobbing with relief behind his mask.

The tense moment when your identical twin flatlines in A&E, as a result of treatment for the ongoing after-effects of COVID-19. Watch @xandvt and @DoctorChrisVT in their new documentary #SurvivingTheVirus: My Brother & Me, @BBCOne, 9pm pic.twitter.com/rDdeHdLnHM

The BBC shared a clip, which featured on The One Show earlier this week, of the emotional moment on Twitter.

It left viewers ‘speechless’, while others admitted they found it ‘hard to watch’.

One said simply, “Oh lordy” alongside a crying emoji.

Another confessed: “I bawled when Chris did.”

A third wrote: “It just makes you hold your breath and it’s the longest 10 seconds ever…”

Oh lordy 😭 But the shock woke him from the anaesthetic, or was that just sedation? Every time I’ve seen you talk on Op Ouch about having the virus, I’ve gritted my teeth so as not to blurt out to my 6yo what ‘actually’ happened!

When I watched this clip on the one show on Monday I bawled when Chris did…..can’t wait to cry through the whole damn programme later haha 😂

No better the second time at all! It just makes you hold your breath and it’s the longest 10 seconds ever…

“Incredibly powerful programme showing the reality of COVID-19,” praised a fourth. “As an identical twin feeling very emotional. Massive thank you to all involved.”

Someone else put: “Oh my god. I am absolutely speechless. You two are pretty incredible. What a massively personal and heart (literally) rending moment.”

Oh my god – I am absolutely speechless.
you two are pretty incredible. What a massively personal and heart (literally) rending moment. I shall be watching 🧐🙁

Love these two. I’ve cried every time I’ve watched the clip. I hope that Xand recovers and is soon back to full health. That goes for everyone suffering too. X

Wow…this must have been terrible !
So moving…glad you were there for your brother 🙌🏼

Read more: Reopening schools could spark a second wave as test and trace is not good enough

“Crikey this is a hard watch…” one gobsmacked viewer said.

“Wow… this must have been terrible!” another wrote, adding: “So moving… glad you were there for your brother.”

What did you think of Surviving the Virus: My Brother & Me? Leave us a comment on our Facebook page @EntertainmentDailyFix and let us know.