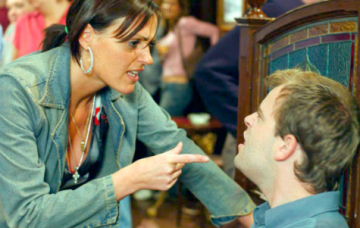 Karen back on the cobbles would be a game changer

Many soap stars return to the shows that made them famous once they realise that the grass isn’t always greener on the drama side – or that Hollywood isn’t actually calling.

But few have enjoyed the success of Suranne Jones, who has gone on to become a critically acclaimed actress, just as loved by the public as when she crashed around the Corrie cobbles as Karen McDonald.

However, despite currently riding high as one of the country’s top screen actresses – lauded for her roles in Doctor Foster, Scott & Bailey, Vincent and Unforgiven – she hasn’t forgotten her roots.

The mum of one has confirmed she would come back to Weatherfield.

And Steve McDonald had better watch out, as his ex-missus would likely be gunning for him first.

Suranne left her role as the feisty wife of the former Rovers landlord back in 2004, after being unceremoniously dumped.

She’d put up with a fair amount of rubbish – including him knocking up arch rival Tracy Barlow.

A leopard never changes his spots – and Suranne has now caught up on news that Steve pulled the same stunt – getting Leanne Battersby up the duff while on a break from wife Michelle.

She revealed: “I didn’t know Steve had a baby – that is news to me and I am gobsmacked.

“I don’t have time to keep up with Corrie but I’m friends with Jennie McAlphine and Antony Cotton so I do catch up.”

The 41-year-old NTA winner would be well up for heading back to Weatherfield to sort everyone out – for a good cause.

She added: “If it was for a good cause and we were going to raise a lot of money, I’d ­definitely consider it for Comic Relief.”

Right everyone, let’s get collecting those coins and notes!

Would you love to see Karen McDonald return?