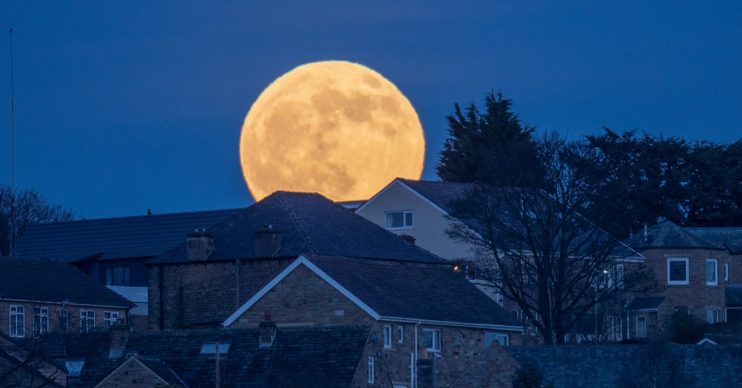 A rare Super Pink Moon will rise above the UK tonight (April 7).

Look up at the sky later on this evening and you’ll notice it’s a lot bigger than usual.

In fact, the moon will appear to be the biggest it has all year as it reaches its closest point to Earth – known as its perigee.

But what is the meaning behind its name and what time is best to see the moon tonight?

Sorry to disappoint, but the moon will not turn pink tonight – it’ll just look a lot bigger and brighter than usual.

In truth, the term Pink Moon originates in Native American and Colonial-era history.

The super full moon seen every April corresponds with the first bloom of moss pink, also known as creeping phlox, in North America.

Due to the seasonal association, April’s annual full Moon became known as the Pink Moon – and the name latched on globally.

“Historically, full Moon names were used to track the seasons and, for this reason, often relate closely to nature,” according to the Old Farmer’s Almanac.

“Traditionally, each full Moon name was applied to the entire lunar month in which it occurred, rather than just the full Moon itself.”

What time is the Super Pink Moon?

In the UK, the Pink Moon is set to peak in the early hours of tomorrow morning (April 8).

At around 4.35am, the full moon will peak as the lunar orb moves directly across from the sun.

The moon will appear around 7% bigger and about 15% brighter than a typical full moon.

If you happen to miss the moon tonight, don’t panic as it will continue to appear in the sky for around three days.

What colour will the moon be?

Although it will not be pink, the moon may very well look different than usual in terms of colour.

Many may even notice that it appears slightly orange in colour.

This is because Brits will be seeing the moon via reflected sunlight that has been scattered through Earth’s atmosphere.

According to experts, the colour will look particularly impressive at around 7.15pm this evening.

Will you be looking out for the Super Pink Moon tonight? Leave us a comment on our Facebook page @EntertainmentDailyFix and let us know.