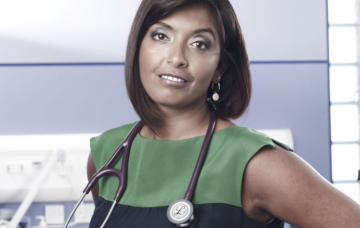 Actress was in the medical drama for nine years

Actress Sunetra Sarker has opened up about why she decided to leave Casualty after being in the medical drama for nine years.

Sunetra, who played Dr Zoe Hanna on the BBC show, recently admitted on Zoe Ball on… Sunday that she wanted to “find something very different” to the show she was already doing.

And Sunetra has certainly done that.

She is currently playing the part of Kaneez Paracha in Ackley Bridge – who couldn’t be more different from her alter ego on Casualty.

But Sunetra’s love for her new role doesn’t mean she values her time on Casualty any less.

The actress has admitted that the cast and crew at the show are like family to her, which isn’t surprising after spending nearly a decade working there.

Although it might be two years since leaving Casualty, Sunetra did revisit the role when she went back for a one-off episode…

“It was like going for a school reunion… I have to be honest, there is always going to be a little part of me in Casualty.

“It was an honour to go back!”

Watch Ackley Bridge on Tuesdays at 8pm on Channel 4.

Are you an Ackley Bridge fan? Leave us a comment on our Facebook page @EntertainmentDailyFix and let us know what you think!