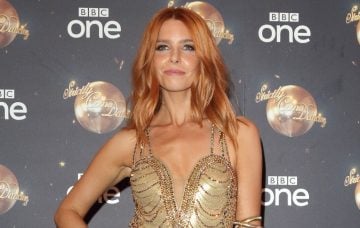 It's definitely a big change...

Strictly Come Dancing’s Stacey Dooley has showed off her dramatic new makeover ahead of Saturday night’s installment of the show.

The  journalist and presenter, 31, took to her Instagram stories on Thursday showing herself sporting a blonde curly afro wig.

Stacey, who is partnered with professional dancer Kevin Clifton on the show, told fans she was trying out new looks and admitted she was a fan of her new hairdo.

In the clip, Stacey flaunts the wig, as she says: “I’m just trying out different looks and I’m not hating this I have to say,” as she touched her curls.

She then posted another video of herself singing Kylie Minogue and Jason Donovan’s Especially For You, which sees Kylie sports a curly hairdo in the song’s music video.

Turning the camera to Kevin, Stacey says: “You can be Jason!”

Stacey made her debut on the BBC show last Saturday when the brand new series began.

After it was announced she’d be a contestant on the show, Stacey expressed her excitement saying she’s excited to add “becoming a dancing genius” to her list.

She said: “It’s happening! I’m taking part in Strictly Come Dancing this year and my mother is going to explode.

“2018 has already been such an incredible year for me, I’ve done some amazing things and I’m excited to add ‘becoming a dancing GENIUS’ to the list!

“Typically, work for me is very serious and can be quite hard core so I’m going to soak up the escapism and bathe in the sequins. See you on the dancefloor!”

Speaking at the Strictly launch earlier this month, Stacey also spoke about her co-stars.

“I’m excited to be alongside them.”

Stacey is known for her BBC Three series Stacey Dooley Investigates, which began in 2009. Her programmes examine current affairs issues affecting young people around the world.

She has previously filmed documentaries in Cambodia, Democratic Republic of Congo and her home town of Luton.

Stacey was awarded an MBE for services to broadcasting as part of the Queen’s Birthday Honours list in June.

Strictly’s new series kicked off with great ratings, attracting an average audience of 8.1 million (40.9% share) and peaking at 8.5 million viewers, making it the most watched show of the day across all channels.

What do you think of Stacey’s Strictly makeover? Leave us a comment on our Facebook page @EntertainmentDailyFix and let us know what you think!