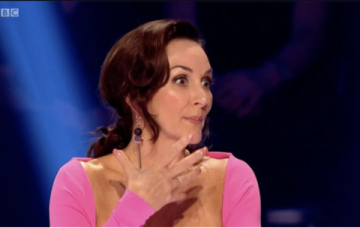 Shirley Ballas has left her fans baffled as she accidentally shared her Google search history on Instagram before deleting it.

The Strictly Come Dancing judge, 58, appeared to have googled “Shirley Ballas engaged diamond ring” and posted one of the image results to her Instagram page.

However, it seems Shirley forgot to crop the photo as the search term was still visible at the top of her screen and it wasn’t long before she removed the post from her account.

Read more: Shirley Ballas fires back at Strictly fans for criticising her marking

It comes after Shirley raised eyebrows at the Pride of Britain Awards on Monday night as she wore a stunning cream silk dress and sported a huge rock on her left hand.

When asked about the diamond ring at the star-studded event, Shirley told the Daily Express: “Wouldn’t you like to know.”

However, a representative for the star later shut down rumours she was engaged.

ED! has contacted reps for Shirley for further comment.

Earlier this year, Shirley opened up about her current relationship status and her former marriages.

Speaking to Good Housekeeping magazine in August, Shirley insisted she was single and hasn’t been on a date for a few years.

“When I married Sammy [Stepford], my first husband, we were both just so young.”

Shirley added: “But I’ve had a hugely successful career and I owe a lot of what I learnt in the industry to him, because he was already a top professional, and I was a nobody, really.”

The star was also married to second husband Corky Ballas from 1985 to 2007.

Earlier this month, Shirley hit back at fans for criticising the marks and comments she gives to contestants on the show.

It comes after Capital FM DJ Vick Hope said Shirley appeared to have “relished” in criticising her performances on the dance floor.

When asked by her Capital FM co-star Ronan Kemp if she believes Shirley didn’t like her, Vick said: “It was from week one that people were suggesting there was something there, I don’t know. It’s been consistent and Saturday night I really felt it was just weird, wasn’t it?

Vick was eliminated from the competition earlier this month alongside pro partner Graziano Di Prima.

However, Shirley told the Daily Star: “It’s all down to the public vote and I would appreciate it if I didn’t get 50,000 tweets being horrible because I sent someone home.”

Suggesting those contestants that have been booted off have been the right ones to leave, she added: “Perhaps they shouldn’t have been there in the first place – do you know what I’m saying?”

She also added: “I try to be positive and not to hurt anybody and put anyone’s confidence down.”

What did you think of Shirley’s comments? Leave us a comment on our Facebook page @EntertainmentDailyFix and let us know what you think!