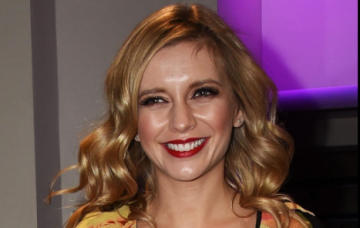 Countdown star said a wedding is "not really on our agenda"

They’ve been together for four years after meeting on Strictly Come Dancing but Rachel Riley has said we won’t be hearing wedding bells for her and Pasha Kovalev anytime soon.

The Countdown star says they are both currently too busy to consider tying the knot so it’s “not on our agenda”.

“It is not something we feel would add anything to our relationship,” she told Reveal magazine. “We’re quite busy so we barely get time to see one another.”

She admitted when they do have time to spend together, “getting to see the world is much more of a priority for us than getting married.”

Rachel, 32, also said in a separate interview that she doesn’t want children yet either.

The Oxford graduate told the Mail on Sunday’s Event magazine: “All my friends are getting pregnant at the moment. That’s good for them, but it’s currently not on my radar.”

Love blossomed between Rachel and Pasha, 38, after they became dance partners on Strictly in 2013.

He recently appeared on her TV show by filling one of the seats in dictionary corner on Countdown.

Sharing a picture of them in the studio together during filming earlier this year, she wrote: “My favourite dictionary corner guest. Just filmed 5 shows which go out in April, right in the middle of his UK tour, in the meantime the new catchphrase is Keeeeeeep Countdowning!”

One of his episodes has just been broadcast where he made Rachel laugh when he pointed out a rude seven letter word could be found using the letters HMWOIUEBL.

Rachel shared the word with her Instagram followers on her board, writing: “‪Off the edit room floor! One day I’ll grow up enough not to laugh at this, but for now, it’s officially funny.”

She also tweeted a clip of the moment, writing: “Can’t take @PashaKovalev anywhere. This was supposed to be the clean version of the show!”

Perhaps Pasha thought he was on 8 Out Of 10 Cats Does Countdown!

Would you like to see Rachel and Pasha tie the knot? Leave us a comment on our Facebook page @EntertainmentDailyFix and let us know what you think!