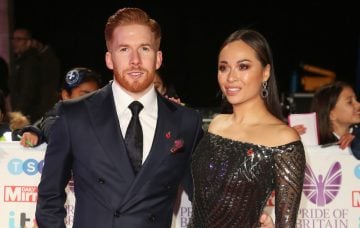 They apparently went to Cambodia and then St Petersburg

There are not many couples who could’ve survived such a public betrayal but Strictly Come Dancing couple Neil and Katya Jones have seemed nothing but solid since THAT kiss with Seann Walsh.

But a new report says it hasn’t all been plain sailing, as they recently took a “make-or-break” holiday to Cambodia, in the hopes of saving their marriage.

Insiders told The Sun: “Those close to Neil and Katya have been saying this was a make-or-break holiday. Neil really felt like the trust had gone and he wasn’t quite sure he knew who Katya was any more.

“They decided to go away for some time out of the spotlight so they could have some very frank conversations.”

The source added that the trip has helped, saying: “Katya begged for forgiveness and promised it would never happen again — while Neil agreed to move towards getting the trust back and putting it both behind them.’

Katya, 29, kissed comedian, Seann, 33, on a drunken night out in London last October – not long into rehearsals for the latest series of the BBC dance show.

They both publicly apologised, with the professional dancer insisting her marriage was “fine.” But Neil reportedly later asked her to stay away from Seann, after the comedian made a bizarre joke at his expense, calling him “gay.”

The couple are said to have spent a few days in Asia, before heading to St Petersburg, Russia to see in the New Year.

Both Katya and Neil have shared some snowy pics and on Thursday Neil posted a chilly-looking selfie with his wife.

He wrote: “Wow it’s cold here in Russia but I do love a bit of skating. I only wish I could dance on ice as well, but as a young boy, after watching the mighty ducks movie, I fell in love with the ice but everyone stopped me, saying what if you break your legs? Now I’m a big boy and I can do what I want 😜.”

It followed the 36-year-old doing a Q&A on Instagram, with one fan wanting to know: “Are you back with Katya?”

Neil posted a sweet selfie with his wife, writing: “I’ve never been away from Katya.” Another fan asked: “You still with your wife?” He simply replied: “Yes”, while one more questioned their relationship and he told them they’d been married five years.

We’re glad these two are putting the work in to ensure their marriage survives. We can’t handle another Strictly Curse casualty…

Are you happy to see these two looking so strong? Leave us a comment on our Facebook page @EntertainmentDailyFix and let us know what you think.