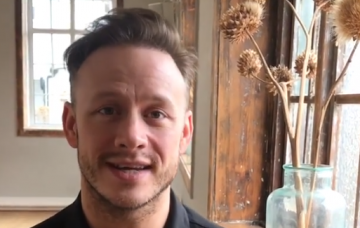 He wants to be note perfect

The professional dancer will have no issues with the moves when he treads the boards in Rock Of Ages, but has revealed he’s struggling when it comes to his singing.

Sharing a video with his Instagram followers alongside his voice coach, Lucy, he said: “Hey everyone, so I’ve just had a wicked singing lesson, this is my singing teacher, Lucy, from Voice Unlocked.

“I’m doing Rock of Ages opening in Glasgow in just over a week’s time and there’s one bit in one of the songs that I was struggling with. I felt like I needed a singing lesson just to get that bit sorted out.”

He added that the hour-long lesson was well worth it as he’s now nailed the note.

“Lucy has given me the key and unlocked it for me, so thanks Lucy,” he said.

Lucy agreed that Kevin was now sounding “awesome” and urged viewers to check him out in Rock Of Ages, where he’ll play Stacee Jaxx.

Kevin’s fans said they were looking forward to seeing him when the show goes on tour.

“Go you! Good luck for the first show!” wrote one.

“Cannot wait to hear your singing voice,” said another.

Others asked if they could have a sneak listen of his dulcet tones.

“Give us a sample…” one urged.

“Can we please hear you sing?? Just a little bit please! I can’t wait till February when I come and see you in the show,” begged another.

Performances of Rock Of Ages begin in Scotland from January 22 before Kevin then takes to the stage in his home town of Grimsby.

Other stops on the UK tour, which ends in July, include Oxford, Nottingham, Bristol and Southampton.

However, Kevin, 36, won’t be performing in every show, as he’ll be sharing the role with Antony Costa from Blue. Kevin will appear in the shows from January to early April and June to July, while Anthony will perform the remaining April dates, plus performances in May and on 1 June.

Kevin won the last series of Strictly with his partner Stacey Dooley.

But his commitment to Rock Of Ages means he won’t be able to dance with her in the Strictly Live Tour, which also begins in January.

Instead the presenter will perform her routines with Ajaz Skorjanec.

Will you go and see Kevin in Rock Of Ages? Or would you rather he was on the Strictly Live Tour? Leave us a comment on our Facebook page @EntertainmentDailyFix and let us know what you think!