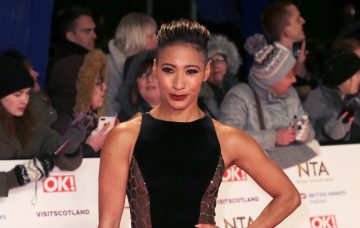 Kevin's ex-wife is reportedly keen to go back to Haeur

The Strictly pro dancer, 37, has seemingly remained on good terms with her ex Kevin, and they’ve continued to both appear on Strictly Come Dancing since their March 2018 split.

But a new report in The Sun claims Karen has finally reached her limits following the news that 2018 Strictly winners Kevin and Stacey are allegedly dating.

A source told the publication: “Karen confronted Kevin about his relationship with Stacey at the end of the last series but he was adamant it was purely platonic.

“Kevin and Stacey insist they only started dating officially this month but Karen is still annoyed he wasn’t more honest about the situation.

“She had been considering changing her name for a while but this has cemented her decision. This is Kevin’s business but she no longer wants to be linked to him. When the next series of Strictly starts she’ll be known as Karen Hauer.”

Since splitting with Kevin last year, Karen has already moved on and is dating opera singer David Webb.

“I went to a bar and took a load of anxiety pills with another large glass of wine,” she told The Sun.

And Stacey’s now ex-boyfriend, Sam Tucknott, has also said some not so nice things about Kevin.

He claims that he discovered a text from Kevin to Stacey that read “I love you” and went on to slam Kevin as a “snake” and “slippery”.

Stacey later took to Twitter to address the alleged scandal, claiming that there are “two sides to every story” and that she loved Sam “very much and only wish him happiness and success going forward”.

While Kevin is yet to publicly address the rumours, he did pay tribute to Stacey on the opening night of his new Burn The Floor tour, calling her a “miracle”.

EntertainmentDaily has reached out to Karen Clifton’s management for comment.

What do you think of Karen’s potential name change? Let us know what you think on our Facebook page @EntertainmentDailyFix.