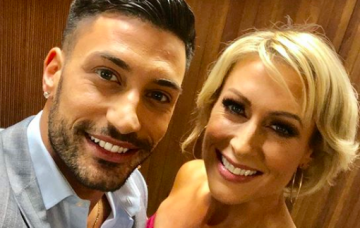 The Strictly Curse has struck a couple of times this series, and after pictures emerged of Faye Tozer and her dance partner Giovanni Pernice looking cosy on a “date”, it seemed to some as though it had struck again.

But now the professional dancer has joked about the rumours, laughing them off with a hilarious spoof video.

Italian Giovanni, 28, shared a video on Instagram, showing him and married Faye enjoying a mock-romantic moment over dinner.

In the clip, he reaches across a table to remove some salad from her face, before turning to the camera to say what sounds like: “Now we’re having an affair!”

The dancer – who has reportedly been on a few dates with Strictly favourite, former Pussycat Dolls Ashley Roberts – captioned it simply: “No comment …. @fayetozersmith !!! 🤣🤣🤣.”

His 217k followers thought it was brilliant, with one commenting: “I love him and his little digs 😂.”

Another added: “I love this! In your face paparazzi 😂😂.”

The pair sparked headlines on Faye’s 43rd birthday, when they were pictured at an “intimate” lunch together in Newcastle, where she lives with her husband of nine years, IT Consultant Michael Smith.

Giovanni reportedly ordered his partner a cake and the whole restaurant sang Happy Birthday. He was also pictured feeding Faye.

The singer’s husband, Michael, who is dad to her son Ben, also seemed to laugh off the idea of any Strictly Curse, sharing a jokey selfie with food on his face, captioning it: “Where’s @pernicegiovann1 when you need him? Help me out.”

Meanwhile on Strictly Come Dancing, Faye and Giovanni were second place on the leaderboard last weekend with 36 points.

That was despite some lukewarm comments from head judge, Shirley Ballas, who told Faye the dance wasn’t “dynamic” enough, and said she “expected more.”

It caused an outcry and Shirley was bombarded with hate-tweets.

Even Giovanni defended Faye, commenting that Shirley is a “Queen. So we just accept everything that she said. [But] I think there are other ways to say the comments.”

Tonight will reveal how things work out for them up in Blackpool.

What do you think of Giovanni’s video? Leave us a comment on our Facebook page @EntertainmentDailyFix and let us know what you think.