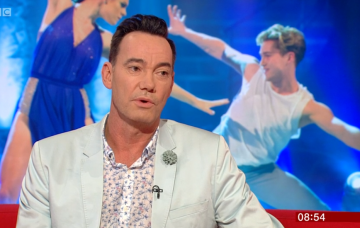 Radio DJ Vick was eliminated from the programme in Sunday’s episode after comedian Seann and his partner Katya Jones were saved by judges Shirley Ballas, Dame Darcey Bussell and guest judge Alfonso Ribeiro.

Craig, 53, was the only one to vote in favour of Vick and her partner, Graziano Di Prima.

It’s time to say goodbye to this brilliant pair with the best hair, @VickNHope and @GrazianoDiPrima 💖 #Strictly pic.twitter.com/3ziywzz5qW

He told BBC Breakfast on Monday: “(Vick) was fantastic, I voted for her to stay in, obviously, but the other judges made the decision and Shirley had to make the ultimate decision in the end, and she chose Seann, which is absolutely fine.

“I think equally they both improved in the dance-off, which was great, but it’s down to personal taste, and I just preferred that one dance.”

But he added: “I think technically they were both pretty abysmal, to be honest, it is true.

“I just went for the one that I liked the best on the night.”

Seann and Katya had attempted their quickstep to Lightning Bolt by Jake Bugg for a second time, while Vick and Graziano performed their cha cha cha to More Than Friends by James Hype featuring Kelli-Leigh.

Some Strictly fans were shocked that Vick had been eliminated over Seann.

The previous week, Vick had been one of the top-scoring dancers with 29 points and was among the favourites to win the series, while Seann and Katya had been at the centre of a media storm after they were photographed kissing while both in relationships.

Craig said he was glad that Seann and Katya had returned to the dancefloor in the wake of the scandal, because “this is a profession, this is a job” and that they were being paid for it.

He added that the pair are now “winning the day”.

The judge also addressed reports about negative comments he made about Shirley during his recent book tour.

Asked about being warned by Strictly bosses over his remarks, Craig said: “Isn’t there more pressing news?

“A journalist has been murdered, wouldn’t that be better to put on the front of the paper? Brexit, let’s talk about that. Something that is actually going to change our lives.”

He added: “I think there are other things to talk about.”

Were you sad to see Vick and Graziano go at the weekend? Leave us a comment on our Facebook page @EntertainmentDailyFix and let us know what you think.