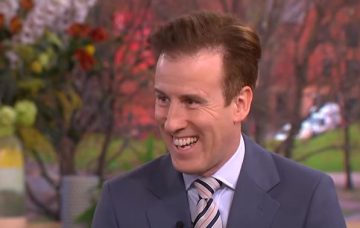 Strictly Come Dancing stalwart Anton Du Beke has shared a rare glimpse into his life as a father of twins.

Anton, 51, who revealed his children’s names for the first time last week, tweeted: “Wow, George and Henrietta’s 1 year (where’d that time go?) injections today… not sure who was more traumatised, them or me!”

His short message thrilled fans, as Anton has always kept his children away from the spotlight and never posts about them on social media.

Read more: Alexandra Burke reveals why she’s no plans for kids just yet

One fan advised: “That time goes so fast, enjoy each moment you can!”

Another said: “They won’t remember it; you’re the only one traumatised not them!”

A third added: “It’s the look they give you…’Why are you letting them do this?!?’ Ugh!”

Anton announced news about his babies on Instagram in March last year, posting a picture of two tiny pairs of ribboned booties with his signature stage top hat and cane.

“Oh my! The little dancing feet have arrived. Mum and twins are perfect and dad is ridiculously excited!” he wrote.

Anton revealed the twins’ names for the first time last week, during an interview with Tess Daly for Heart FM’s Confessions Of A Celebrity School Run.

He added of fatherhood: “It’s the dream. It’s absolutely incredible. We are so lucky.”

Anton had previously joked he was leaning towards the names Antoine and Antoinette – but wife Hannah wasn’t as keen!

He said on This Morning ahead of his children’s births: “We [know it’s a boy and a girl]. I’ve had my eye on a couple of names, but it’s sort of met with a cold stare every time I mention it from Hannah.

As the only remaining professional dancer from BBC One’s Strictly Come Dancing original line-up, he has yet to confirm his return to the series this year.

However, Anton has said he’s hopeful he will be back.

Anton told Press Association last month: “Those decisions have not been made yet. It’s about now, usually March, when they make these decisions. When it (the series) finishes they give up for the Strictly tour.

“Then they’ll work towards a new series. Hopefully all being well we will get it. I love the show. Getting a partner, getting together, getting in the studio.

“I love the process. With your partner, you are doing your own show within the show. I love creating something.

“I was with Ruth (Langsford) last year and hopefully she enjoyed it. That in itself is a success, when a partner looks back and says they really enjoyed it. I am lucky I get to come back and do it again.”

Series regular Brendan Cole announced in January that he would not be returning following the BBC’s “editorial decision” not to renew his contract.

Do you want Anton to return to Strictly? Leave us a comment on our Facebook page @EntertainmentDailyFix and let us know what you think!