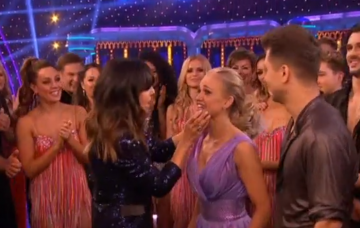 Strictly viewers worried Ashley was bleeding from her mouth

Fortunately it was just lipstick

But some viewers were concerned for her welfare, worried that she was bleeding from her mouth.

They had noticed that one of her teeth was red as she grinned along to the judges’ positive feedback.

And they feared she might have caused herself an injury.

is Ashley’s mouth bleeding or is that lipstick on her tooth? #strictly

Has Ashley hit herself in the face or is it just lipstick? #Strictly

Is that lipstick or blood on Ashley’s teeth? #strictly

Has Ashley got blood or lipstick on her tooth…? #Strictly

Fortunately, it was just her lipstick which had smudged from her lips to her tooth during the energetic routine.

Despite facing Ashley as she spoke to her, Tess failed to point out the make-up fail.

It was left to Pasha to point it out after noticing the smear of red on his partner’s gnashers as they made their way up the stairs to hear their scores.

Props to Pasha for pointing out that lipstick on the teeth moment. #scd #strictly

Pasha is the sort of friend who tells you when you have lipstick on your teeth. But then we knew that. #Strictly #Strictly2028

Claudia then proved she is the girlfriend we’d all like to have by wiping the smudge off with her fingers.