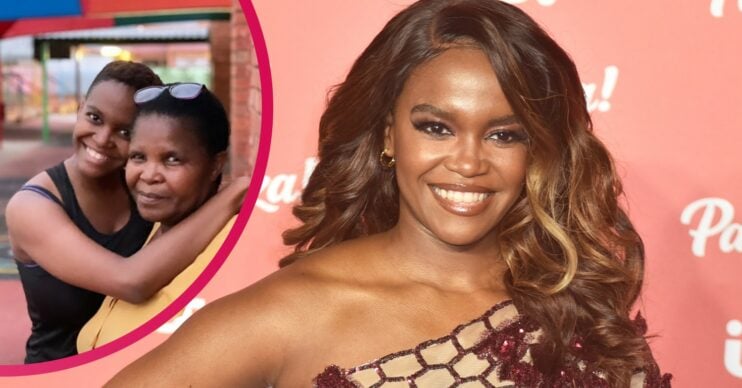 Strictly star Oti Mabuse took to Instagram yesterday to pay tribute to her mother, crediting her for her success as a dancer.

The pro dancer is currently back in her native South Africa after heading home there for Christmas.

Oti posted a series of heartfelt snaps and videos on her Instagram story last night.

In the stories, the Strictly Come Dancing pro dancer bought to light her mother’s legacy and gave fans a glimpse at where it all started for the 31-year-old.

One of Oti’s many pictures was a heartwarming snap of herself and her mother outside a school. Oti, seen sporting a natural look, is hugging her mum as the pair smile for the camera.

“I see the legacy my mother has built,” she captioned the photo. “And I’m so unbelievably proud.”

She continued, writing: “Inspired and honoured to be her daughter.”

In another post on her story, Oti gave her 637k followers a look at where her love for dancing started.

The star posted another picture, this one a wider shot of herself and her mother stood outside her mum’s dance school.

“And helped those who couldn’t help themselves,” she added.

The star then paid further tribute to her mum in the post.

“But it takes a woman with fire in her belly to keep it going from strength to strength,” she added. “That’s my mother.”

In another short video, the dancer reflected on how she and her sisters went from living in South Africa to taking the dancing world by storm.

What else has Oti Mabuse been up to recently?

Oti’s return home comes not soon after it was announced that she was to become a judge on Dancing On Ice this series.

The 31-year-old is replacing John Barrowman on the show this year, and couldn’t contain her excitement when announcing it last month.

“Ice ice baby,” she said on Instagram. “Woke up to amazing messages from my friends. Really excited to be joining the beautiful cast of @dancingonice.

Due to her new role on Dancing On Ice, it has been rumored that Oti won’t return to Strictly next year.

“I can’t imagine a return to Strictly after joining a primetime ITV show,” Harry Rutter, a celebrity PR told the Metro in December.

“There definitely comes a point where stars just fancy a change.”