It's such a shame, but we can see her point!

Debbie McGee has announced that she is hanging up her dancing shoes following her success on Strictly Come Dancing.

The reason? Because nobody will be as good to dance with as her dance partner Giovanni Pernice.

But before she does disappear from the dance floor, she would love to whirl around the ballroom one more time with Giovanni before his next dance partner is on the scene.

Talking to The Sun, Debbie said: “I had this really special chemistry with Giovanni Pernice on Strictly Come Dancing last year, so hopefully we’ll dance again before he gets his new Strictly partner in September.”

“The hard thing when you’ve done Strictly is that the professional you’ve been partnered with is the best in the world. How can you dance with someone else after that?”

The former magician’s assistant also revealed that she would ask her late husband, Paul Daniels, for the strength to get through the performance before each show.

She revealed to The Mirror: “I feel he is with me. When I walk down that studio floor, there is always a moment I think of him.”

“He had so much confidence. ‘I kind of say, “Come on darling, give me some of your confidence”. And it takes away my nerves.”

And Giovanni paid his own special tribute to Debbie when the Strictly Come Dancing Live tour ended in February. He posted a gorgeous post saying: “ends today, after almost 5 months, one of the most beautiful experiences of my life.”

“@thedebbiemcgee you have been a joy to work with! laugh and joke every day this is what I will miss most of all.but I’m not worried because we see each other very soon.until next time D.E.B.B.i.E” 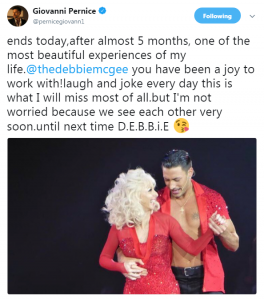 Let’s hope they’ll be cha cha cha-ing around a dance floor for us all again very soon!

Do you think Debbie’s being too hasty saying she won’t dance again? Let us know by commenting on our Facebook page @EntertainmentDailyFix!